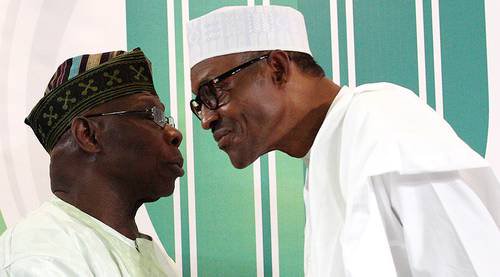 On December 12, 2013, I woke up to Olusegun Obasanjo’s ‘Before it is too late’; a caustic letter to former President Goodluck Jonathan. In the 18-page missive, Ebora Owu diced Jonathan like a sushi chef.

Obasanjo delineated 10 reasons he chose to drag Jonathan before the public square for some good spanking. He said the former president ‘’must move away from advertently or inadvertently dividing the country along weak seams of north-south and Christian-Muslim’’, and that ‘’nothing should be done to allow the country to degenerate into economic dormancy, stagnation or retrogression’’.

He also said, ‘’some of our international friends and development partners are genuinely worried about signs and signals that are coming out of Nigeria’’.

Really, Obasanjo said something profound in the letter – profound for its appositeness in the current administration.

He said: ‘’Those who advise you to go hard on those who oppose you are your worst enemies. Democratic politics admits and is permissive of supporters and opponents. When the consequences come, those who have wrongly advised you will not be there to help carry the can. Egypt must teach some lesson.’’

Arguably, that mordant letter to Jonathan sealed the coffin of the administration nail by nail for it handed the opposition the mortar for combat and mobilised mass consciences against the government.

However, I have observed that Ebora Owu may be losing prolificacy, or perhaps, he has cowered to intimidation by the Buhari administration. Could this Orisa be afraid?

Although he wrote a less virulent open letter to President Buhari on the parlous state of security in the past and did not dither in bellowing the president’s incompetence, he suspended the pastime, and even stopped making critical comments on the administration after agents of the regime went for Atiku Abubakar’s in-law.

Obasanjo supported Atiku, who was the presidential candidate of the Peoples Democratic Party (PDP), in the last election.

In August, the EFCC arraigned Abdullahi Babalele, Atiku’s son-in-law, for allegedly laundering $140,000 in the build-up to the election.

Obviously, Obasanjo is the target of this case.

Now, here is the story.

On November 12, Bashir Mohammed, an associate of Babalele, told a federal high court in Lagos that Atiku’s son-in-law gave Obasanjo the naira equivalent of $140,000.

Mohammed, who was the first witness of the EFCC, described himself as a “close friend” of the accused.

While being led in evidence by Rotimi Oyedepo, EFCC prosecutor, Mohammed detailed how he delivered the money to the former president at his residence in Ogun state.

He said Babalele called him sometime in February, asking him to deliver a message to “an elder statesman”.

He said on Babalele’s request he supplied two bank accounts, which were credited with the said sum.

“When I got to the gate, somebody came and took me inside where I met former President Olusegun Obasanjo and delivered the message.”

If my hunch is right, this case and other devices of the regime are what is obstructing the voice of the Orisa from rebuking the evil in the land.

I believe, Obasanjo now has an assuring experience of how lethal and ruthless the Buhari administration can be. In fact, Buhari once vowed to investigate the ‘’$16 billion’’ Obasanjo allegedly spent on power.

He said: “The previous government mentioned on their own that they spent $16bn on power but you are better witnesses than myself. Where is the power? Where is the money? We will follow them; eventually God willing, we will catch them and get our money back.”

The government was reported to have spent $16 billion on power projects between 1999 and 2007 when Obasanjo was president.

The Buhari administration brooks no opposition. It employs scare artifices and threats to win submission, and most times, it dispatches violence to coerce surrender.

Strong critics of the government are either held in DSS custody against an order of the court or they are threatened, scandalised and harassed. More vigorous voices are needed in the face of this relentless assault on the collective hull.

But really, it now appears the ‘’wailing’’ days of Obasanjo are over; the few comments he has made on the Buhari administration recently are complimentary.

In Yoruba cosmology, the Orisas are a fount of power, justice, order and balance. I do not think Sango will run away from a fight. Obasanjo should not be an Orisa that whimpers. Weaponising Banditry: Of Irresponsibility and Insensitivity