It was reported about a month ago that an explosion occured which killed three persons near BUA cement factory in Sokoto State. 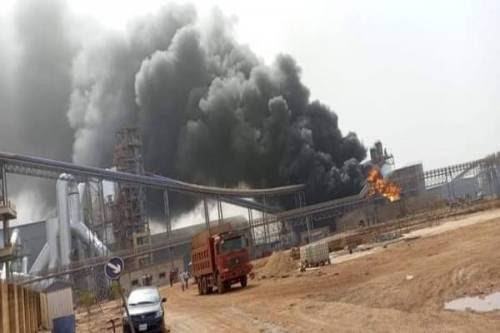 -The explosion site in Sokoto

And despite the combined efforts of the federal and state fire services, the fire raged the explosion according to the company’s reaction was from a diesel storage tank.

This is one of the several agonies of the poor staff of BUA Group.

A particular Hamzat Oladipupo Yusuf has also accused the BUA Group, of withholding his terminal benefits for over a year after retirement.

Yusuf worked at the BUA Suger Refinery in Apapa, Lagos, for about 12 years before he left. As a result, he is entitled to a certain amount of money in terminal benefits, but has not received it.

“Please I need you to help me call on my former employer, BUA Group/BUA Sugar Refinery, to pay my terminal benefits withheld since November 2020,” Yusuf said.

“The head of group HR, in person of Mr. Dotun Adako, had made an initial promise to me that I would be paid in early 2021.

Till today, BUA has not fulfilled its promises. Now, my calls and mails are ignored by the HR and the executive chairman himself. Since they know my number, they don’t answer my calls.”

Yusuf was in contact with her as he expected his payment in early 2021, and she promised payment on behalf of BUA. Then she repeated an old excuse of having to wait for the headquarters.

“I know what this is about. I am not going to be able to answer any of your questions,” Ayo-Oguntoyinbo told this reporter on Tuesday. “You will have to contact the group head of HR.”

We put a call through to the Group Head, Corporate Communication, Otega Ogra who confirmed the case but told us he’s not in the right position to ascertain if the payment has been made or not.

Below are series of letters and screenshots of WhatsApp chats to back Hamzat’s claims: