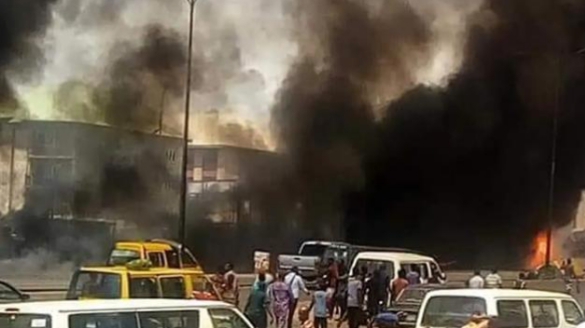 Unidentified gunmen have burned at least 15 shops, several trucks, and cars in the Amorka community of the Ihiala Local Government Area of Anambra State.

According to sources who spoke to newsmen, the hoodlums—who numbered over 10—shot nonstop throughout the night, looting local businesses as the chaos spread.

Amorka is a border town to Imo State; which is close to most communities in Imo State.

“The shooting caused pandemonium as residents and travellers abandoned their shops and vehicles to scamper for safety.

“In the confusion, several shops were looted by hoodlums. Some people say they are IPOB members who were protesting that their leader, Nnamdi Kanu was not released, despite court order,” a source said.

Another source claimed that the hoodlums also dropped sheets of papers, bearing typed messages, saying there will be no peace until Kanu was released.

The Anambra State Police Public Relations Officer, DSP Ikenga Tochukwu, could not be reached for confirmation as at the time of filing this report.