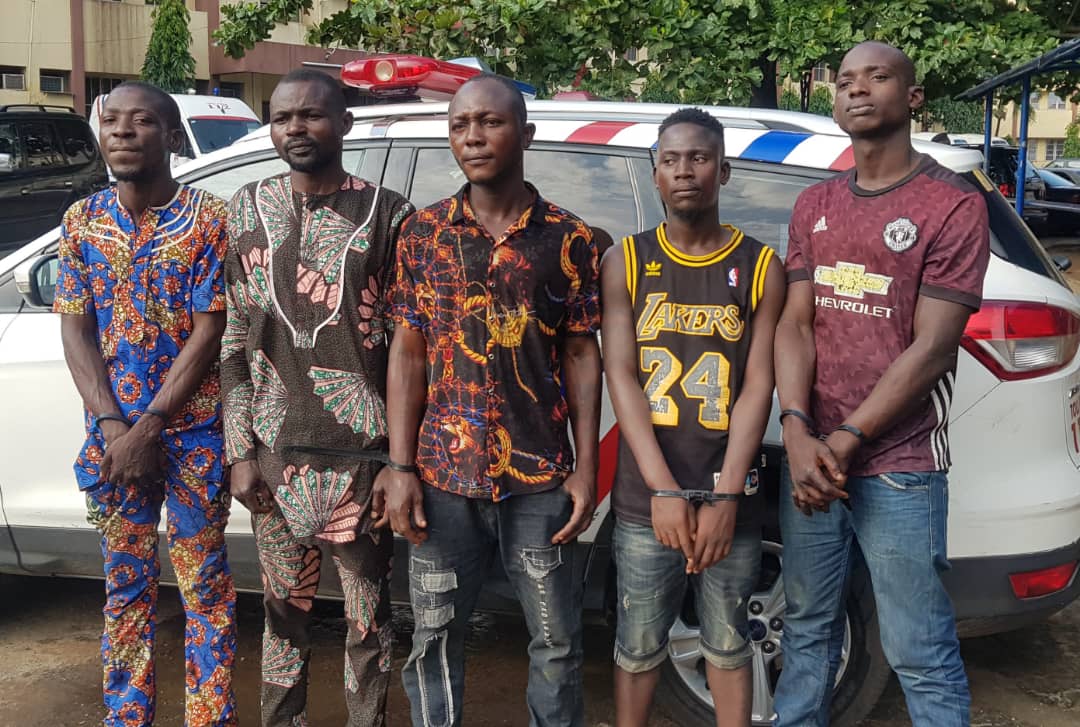 Two suspected robbers, who hijacked a Taxify Toyota Corolla Sports in Lekki and three others that participated in the selling of the car to a dealer in Republic of Benin for the sum of N250,000:00 have been arrested by the Operatives of the Rapid Response Squad (RRS).
The suspects: Michael Sosa (27), Nelson Benson (24), Idowu Dauda (30, Owolabi Shobayo, a.k.a Daju pa (29) and Biliaminu Abu, a.k.a Gengen (43) were all arrested in Ijoko and Otta, Ogun State last week for hijacking and selling a Taxify car in February, 2019.
It was revealed, Michael Sosa in company of Dosumu, now at large, had sometime in February, 2019 converged in Elegushi Beach, Lekki where they both hatched the plan to hijack a Taxify car, move it to Ogun State and sell.
Sosa, a ‘yahoo – boy’, after waiting till 10:00 p.m. ordered a Taxify ride from Agungi Estate to Lagos Island. In the car with him were other suspects, identified as Dosumu and Idowu Samuel.
According to Sosa, “at Abraham Adesanya Estate, Lekki, I told the driver I wanted to ease myself. We alighted, while I pretended to be urinating, Dosumu poured dried pepper he was keeping in a bottle water he bought in traffic. He allowed the substance to dissolve well.
We got back into the car. The Taxify driver was about to start the car when Dosumu poured the mixture on the driver’s head. Spontaneously, he screamed and jumped out of the car. He started shouting for help. I got on his seat and drove the car away from the scene.
I drove to the road leading to Alpha Beach, where we stopped for some hours because we suspected we were being followed. At about 4:00 a.m. on Sunday, I proceeded to Agege via Agidingbi, dropping Dosumu in Omole. I picked Nelson Benson in Agege Stadium. Nelson was to direct us through the routes that prevent us from encountering the police and to Ijoko”, he stated.
He explained further; “at Ijoko, I took the car to Alfa Mouka’s house. He was my spiritualist. I told him the car was stolen. It was at this point we began to source for buyers.
It was introduced to Daju pa and Gengen. The two of them, as I got to know later were dreaded cultists and notorious criminals in the area. Because I was new in the area, I didn’t know them quite well. The area was supposed to be a hide out for my family and I I couldn’t confront the duo. I have been warned that they call the shot there.
They took the car from me, by this time, they were already scheming and getting difficult to understand. I told them I wanted to sell the car for N300,000.
Explaining his role, Daju Pa stated “Eniba (Idowu Dauda) was the one who drove the car to my house in Ijoko. He told me that it belonged to his brother. I discovered that the car had no papers. This made it difficult to sell.
We got a dealer who asked us to bring it to the Republic of Benin. Gengen and I took it across the Nigeria at about 11:00 p.m. after changing the number plate”.
He added, “We sold the Toyota Corolla Sport for N250,000. We would have sold it better than that but for the papers that were not available. I took N190,000 of the money. I gave N60,000 to Gengen while I gave N40,000 to Eniba to give Michael. Although, I got to know that it was N30,000 that got to him. Our link to Benin got N13,000.
That was how we shared the money”.
Speaking on the development, the Commissioner of Police, Zubairu Muazu stated that criminals who think they can escape with nefarious activities perpetrated in Lagos might need to think twice as the command is at alert and would haunt down any criminal in any part of the country.
The suspects have been transferred to SARS for further investigations.
Think It's Cool... Please Share