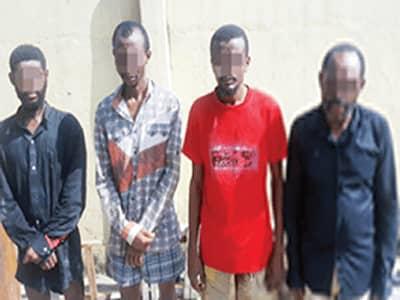 Operatives of the Inspector- General of Police Special Intelligence Response Team (IRT) Led by DCP Abba Kyari have smashed the gang behind the abduction of the Chief Accountant of Plantgeria Limited, an oil servicing firm, operating in Port Harcourt, Rivers State. The victim, Dr. SMC Maduagwu, was kidnapped and a ransom of N20million paid for his release.

Four among the alleged kidnappers have been arrested. The suspects, including a native doctor, have been identified as Tony Rafael, Nnaji Romanus, Nwobodo Uche and Uchechukwu Ibekwe. According to police sources, the suspects were grabbed in their hideouts in Rivers and Imo states. The police said that the suspects have admitted to abducting the Accountant and collecting N20million ransom.

It was gathered that the leader of the gang, Christian Kenjika alias School-Boy, was beheaded by a rival cult group before the operatives could arrest him. It was further learnt that Kenjika had four AK47 rifles and two Pump Action short guns in his armoury before he was killed. The source further said: “School- Boy carried out several kidnappings within Rivers State and was declared wanted by the Rivers State Government.

The government placed a bounty of N20million on him in 2018. He met his waterloo when one of his gang members, Uche, who wanted to take over leadership of the gang, gave out his location to members of De-Gbam confraternity. De-Gbam confraternity had been hunting for him for long.” The hunt for School-Boy and his gang members started after the IGP instructed the IRT Unit, headed by a Deputy Commissioner of Police (DCP), Abba Kyari, to ensure the rescue of Maduagwu. The gang was alleged to have specialised in robbery, cultism and other heinous crimes. Kyari and some members of the unit launched an investigation and by March got information on the activities of the gang of kidnappers.

The Accountant was abducted in February 2018. Part of what the operatives discovered was that a driver working at Planteria Limited, gave information about Maduagwu to members of the gang. This information aided the gang in the abduction of the victim. The driver, Ibekwe, when arrested, made confessional statement that assisted IRT operatives in the arrest of other members of the gang, including the one who orchestrated the murder of School-Boy. According to Ibekwe, 37, he planned the abduction of Maduagwu because he refused to grant him a salary advance. He explained that when he requested for the salary advance, Maduagwu shouted at him. Ibekwe, who is married with three children, said that shouting embarrassed and angered, thus he plotted how to get even with his boss.

He said: “I am a driver to an oil services company known as Plantgeria in Rivers State. I was employed in the 2007 and transferred to Shell Oil to work as a driver in 2017. I was later recalled and posted to the head office of our company to work as a driver to an expatriate. But in 2018, I applied for a salary advance, a sort of a loan from our company. I met the Chief Accountant of our company to perfect the loan, he shouted at me and sent me out of his office.

“I left his office, angry. I thought of how to deal with him. Unfortunately, I got a call from a friend of mine, Stanley, who is also from my community. Stanley was into armed robbery and kidnapping. I narrated what happened between the Chief Accountant and I to him and he suggested that we should kidnap him or any of the expatriates.
I preferred that we should kidnap the accountant, so I gave Stanley the necessary information.

On the day he was to be kidnapped, Stanley called me and I also spoke with Uche. They asked me to inform them when the man would be leaving his office. I did and the next day, I got news from my office that the man had been kidnapped. I was later given the sum of N800, 000 after ransom was paid. I didn’t know the exact amount that was paid as ransom.

I bought a Nissan Primera with my share of the money. “One year after the incident, I was at home with my wife, when policemen entered and arrested me. I’ve told the police all I know about the kidnapping. I also told them that I’ve never gone out with the gang to carry out any form of kidnapping or armed robbery.”

Uchechukwu, 38, who masterminded the beheading of School- Boy, revealed that he orchestrated the murder of his gang leader because the latter was greedy. Uchechukwu, a father of five children, said: “I am a fulltime farmer, but I went into kidnapping when my wife had stroke. The doctor treating her asked for N200, 000. I approached School-Boy as our gang leader, but he gave me only N100, 000.
He told me about the accountant and said that I should keep him under surveillance. I did that for one month. On the day of the abduction, I followed the accountant as he left his office. I tailed him on a motorcycle. When he got to Oil Mill Junction, School-Boy and his other gang members in their police and military uniform, fully armed, accosted and took him into a Toyota Hilux and drove away.

“The man was taken to my farm, where he was kept and ransom negotiation started. Although I wasn’t in the farm with them, after the kidnapping, School-Boy gave me the remaining N100, 000 to give to my wife’s doctor as his balance payment. “Two weeks later, School-Boy called and informed me that N10 million had been paid as ransom for the accountant’s release.
At that time,I didn’t doubt him and he took us and every other person that took part in the operation to the home of a native doctor known as Romanus Nnaji. He started sharing money. He gave me N1.5million to give to Ibekwe and Stanley the informant. He then gave me N500, 000 as my own share.

A few months after that operation, I got a call that my brother has been arrested by the police over the kidnapping of the accountant.
It was then I learnt that the operation fetched us N20million and not N10million as School- Boy claimed. I was angry over the fact that School-Boy cheated every one of us. It meant that he kept N10million to himself and had the gut to share N10million with us.

“I didn’t say anything because policemen were looking for me. I went to a church in Akwa Ibom State for prayers and to ask God for forgiveness.
Police trailed me to the church. Fortunately, when they entered the church, I was in the toilet. When I noticed the police van, I escaped into a nearby bush.”When he got home, he called School-Boy. He told him that policemen were looking for him, that he was tired of running and was thinking of going to police to surrender himself. When School-Boy heard that, he allegedly threatened to him.

Uchechukwu narrated: “I then ran to Imo State, where I stayed for three weeks. IRT men again, came to Imo State to look for me, I escaped. While on the run, I called School- Boy and asked him to give me my share of the other N10million, so that I could leave the Nigeria, but he refused.
I felt the best thing I should do was to set him up and get him killed. I contacted some members of De-Gbam confraternity, who had been looking for him. I gave out his location; they attacked and beheaded him. After I had succeeded in taking out School-Boy, I contacted a lawyer in Owerri Imo State, where I was hiding with my pregnant wife. I told him what happened and asked for his professional advice on what I should do since the police were looking for me. The nurse at the hospital where my wife had gone to deliver her baby called and told me that policemen had trailed my wife to the hospital. I ran away again.

I was later arrested in June 2019 by IRT operatives in Orlu Imo State.”

Romanus, 50, a native doctor, whose role was to prepare charms for the gang members, confessed that he was paid N200,000 to perform oath, whereby members of the gang would never betray one another. He said: “Since I was born, this is the first time I would be arrested. Sometime last year, a group of young men came into my compound. One of them, known as School-Boy said that he wanted everyone of them to take an oath, that they would never betray one another.
I was to admitter the oath. I asked him to bring N100, 000. He also brought other items like dog, water, pepper and vegetable. I killed the dog and poured its blood on my shrine. I told them that anyone who betrayed another would die. “I poured the pepper and vegetable on the shrine. I said that anyone who betrayed any member of the gang, would die. I drank the water and then gave it to them to drink.

School-Boy paid N100, 000 for my services. By 10pm that day, they brought a big bag load of money into my shrine and shared it. I didn’t know the amount of money inside the bag, but I was given N50, 000 in N500 denomination. I asked how they got the money, but School-Boy said he would come back to tell me. The next thing I heard was that School Boy had been killed.