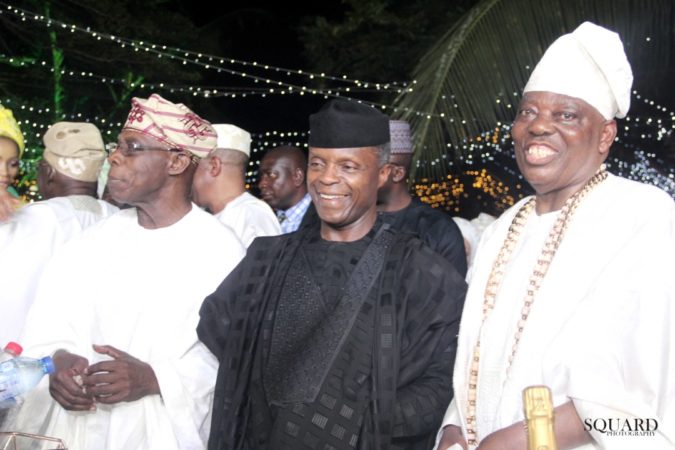 The 80th birthday celebration of Are Razaaq Okoya might have come and gone but one thing would be remembered, its class and royalty will continue to linger on in the minds of family, friends and admirers of the celebrant -a renowned industrialist and business mogul, which event took place at his panache Oluwanishola Estate.
The highlight of the event was the cutting of birthday cake by the celebrator flanked by Vice President Prof. Yemi Osinbajo, Former President Olusegun Obasanjo and former Governor of Lagos, Asiwaju Bola Tinubu among others.
The vice president, who presided over the cutting of the cake, prayed God to grant Okoya 100 years, preserve him and keep him in good health.
For a man who started from a very humble and poor beginning, eking out a living from petty trading, to rise to the topmost echelon as an industrial giant, it should not surprise anyone that his 80th has been celebrated in amidst pomp and the ceremony, starting with a thanksgiving prayer with him and close members of the illustrious Okoya family, led by prominent Islamic clerics.
The build-up of the much-awaited history-making birthday celebrations of business mogul, Alhaji Rasak Akanni Okoya clustered with the A-list guests as the ambiance is engrossed in anticipation of what to come. The guests were thrilled by renditions from different musicians, as the vice president and former President Olusegun Obasanjo stepped out with the birthday boy; Okoya on the dance floor.