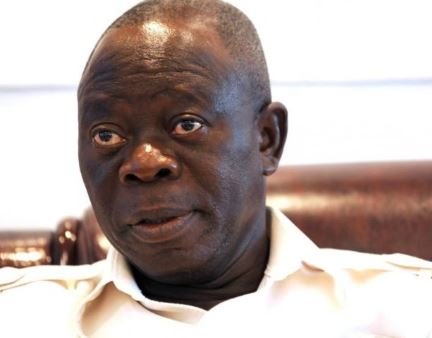 There is heavy security at the Benin Airport over fears of possible booing of National Chairman of the All Progressives Congress, Comrade Adams Oshiomhole.

At the Airport entrance gate, there are soldiers and two police vehicles while others comprising officials of the Department of State Security, Nigeria Security and Civil Defence Corps were stationed at various points of the Airport.

An armoured personnel carrier was also seen at the airport parking lot.

It was gathered that thr heavy mobilisation of security personnel was to forestall any attempt to boo Oshiomhole or prevent him from leaving the airport.

Our learnt that Dr. Pius Odubu, General Charles Airhiavbere, Samson Osagie and APC chieftains loyal to Oshiomhole were at the airport to receive him.

Some youths were also seen in clusters at the airport.

A security source said some APC chieftains have raised alarm of an attack on Oshiomhole and his entourage from Abuja.

In December last year, 15 supporters of the APC loyal to Governor Godwin Obaseki were hospitalized after soldiers and policemen escorting some dignitaries including Oshiomhole that were to attend a political rally in the state fired shots at them

The APC supporters were carrying out a peaceful protest and had set bon fires along the Airport road when the soldiers opened fire on them.