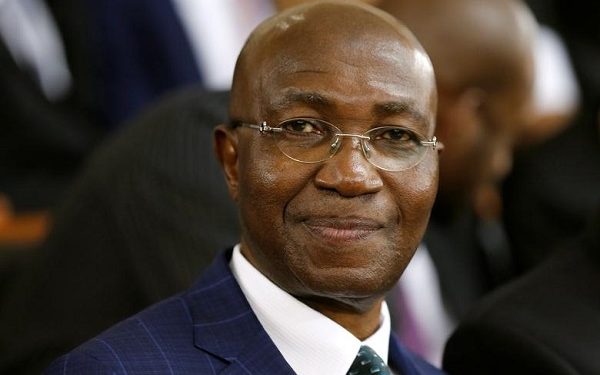 Chief Wole Olanipekun (SAN) who led the legal team of the All Progressive Congress has defended his action for filing an application before the Supreme Court for a review of its February 13, 2020 judgment on the last governorship election in Bayelsa election.

Olanipekun, who spoke in Ikere, on Sunday, during a thanksgiving service at the ultra modern 1,600 capacity church auditorium he donated to Saint Peter’s Anglican Church, said his actions was within the best tradition of legal jurisprudence.

He pledged to break silence on the judgement of the apex court’s judgement at the appropriate time, saying “the truth about the matter will be revealed soon”.

The Supreme Court had on February 13 disqualified the APC candidate on the basis that his deputy, Chief Degi Biobarakuma-Eremionye forged his academic certificates and the court subsequently declared the candidate of the PDP, Chief Duoye Diri, winner of the poll and was sworn-in as the Governor.

Dissatisfied with the verdict, the All Progressive Congress and its candidates, David Lyon through their counsel Olanipekun and Chief Afe Babalola (SAN) respectively filed an application before the apex court to seek review of its earlier judgement.

In its judgement the Supreme Court dismissed and held that the applications were without merit and amounted to abuse of court process.

Justice Amina Augie, who read the lead ruling, said the application was an attempt to make the court violate its rules and. provision of the Constitution which makes it the final court of the land.

Justice Augie said the applications, if granted has the capacity of belittling the dignity and status of the court and open a floodgate for such request in the future.

She expressed regret that senior lawyers in the country could be involved in the filing of such applications.

Subsequently, the apex court awarded the costs of N10m to be personally paid by David Lyon’s lawyer, Chief Afe Babalola (SAN), and APC’s lawyer, Olanipekun (SAN) for agreeing to an application for the review of the apex court’s judgment on Bayelsa election.

It ruled that each of the lawyers must pay the N10m to each of the three respondents – the Peoples Democratic Party, Governor Duoye Diri, and the Deputy Governor of Bayelsa State, Lawrence Ewhruojakpo, bringing the total amount to be paid to N60 million.

Speaking on the issue, Olanipekun said: “I have never regretted any of my actions since I started my legal practice, because I always abide by the ethics of the job.

“The truth about the matter will be revealed soon, but I have the conviction that I have done no wrong, because this is a profession I love so much.

“I saw legal profession as a ministry. I am convinced and  knew that what we did was within the best tradition in law, I can tell anyone about this.

“But I will speak about the whole thing at the appropriate time, I won’t say more than that now”, he said.

On the killings of Christains by terrorists in the North, Olanipekun advised the church to summon courage and stop being acting cowardly in handling the issue threatening the existence of christaindom.

“I could see the leadership of the church are not speaking up loud enough. Though, I believe we need prayers to overcome insurgency and terrorism. I know the Christains must be cautious about their actions, but they should not act cowardly.

Olanipekun added that the Church auditorium he built and  donated was part of his contributions to the spiritual growth of his people and for the development of tourism potential of the state.

“You are all aware of Saint Peter’s Basilica in Vatican city, Saint Paul Church in London and many others. that are tourist centres . There is no tourist that will come to Ikere today that won’t ask of this church and that is the joy and benefit of it”, he stated