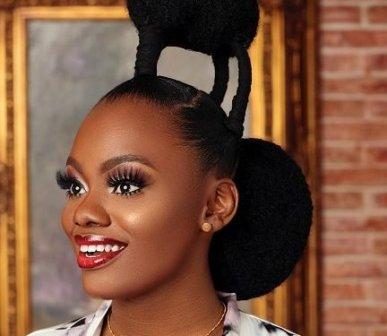 One of Nigeria’s most popular body and sex therapist, Deborah Erioluwapo Ajayi, better known as Omoshola of Omoshola’s Place has accused most married women for causing their husbands infidelity.

In a recent interview, the Ekiti native of Southwest Nigeria says many women go to sleep regarding staying attractive to their husbands after one or two issues.

Hear her: “ That a man cheats is his fault in a way and isn’t at the same time. There could be thousands of reasons men cheat. A boring wife is the devils workshop,” she offered.

“ Some woman become extremely careless after marriage or after they have dropped one or 2 kids. Wives leaving hairs under their armpits, in pubic areas etc. Imagine a man who went to hang out with his friends around a pool and noticed younger girls in bikini, dancing and having fun, the fact that the girl is comfortable in that bikini, her cleavages visible, clean hairless pubic area, her hands up in the sky with no trace of hair underneath her armpit is enough reason for the man to get turned on.

“As much as this man may try to resist, he excuses himself and runs home to his wife, on getting home he sees the opposite of what he saw on the beach, a woman wrapped in faded Ankara remnant. She raised her hands to pick something from the shelve and he notices the thick forest underneath. And when she passes, the smell that comes out from the wrapper pushes him to step backwards. Most married women are found in this category and majority of them are the ones complaining about a man’s infidelity. In situations like this I wouldn’t blame the man,” she added.

She advised that married women should do whatever is necessary to remain attractive to their husbands, adding that the use of aphrodisiac shouldn’t be out of the question.

“My flagship product, produced by me, “The Royal Honey Syrup”, an aphrodisiac specially produced for married women (though single girls buy them) comes handy in this regard . This syrup helps boost a woman’s confidence by the way it’s been introduced to the public, Regardless of whether the vaginal pheromones truly make a person irresistible or not, the fact that you think it does, will make you to act in a bolder, more confident manner. It tightens the walls of the vagina, helps stimulates the vagina to help secrete more juice as a lot of women suffer from vagina dryness. A tight, juicy, odourless vagina – a brain formatter, as I usually call it” she said.

The Omoshola’s Place Chief Executive Officer sells aphrodisiacs with a touch of spiritualism. She also owns a farm in Karu area of the Federal Capital Territory where she rears livestock. She owns a body enhancement spa in Maitama area of Abuja as well as a salon and body spa in Dubai known as HBG Beauty Lounge at the Dubai Investment Park. And recently she launched the biggest African salon and spa in Dubai (Jumeirah).

Her Omoshola’s Empire houses other concerns like HBG Beauty Salon and Cloud 11 Beauty Salon, among others.

She also attended several high institutions in Nigeria but never finished until she relocated to Dubai where she’s currently a part time student in IMT Business School, Dubai, UAE.