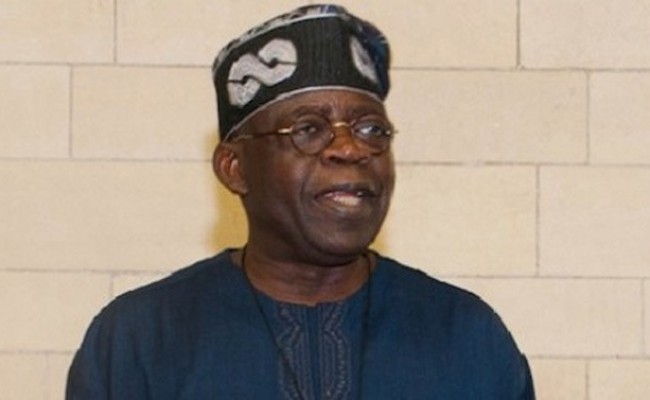 National Leader of the All Progressives Congress (APC) Bola Tinubu has said that the attack on National Chairman of the party, Adams Oshiomhole, is based on 2023 ambitions of some party members.

Tinubu, who broke silence on the moves to oust Oshiomhole, in a statement on Sunday, stressed that those behind the move are suffering from a sickness he called “old Ambition-virus 2023”.

The APC national leader faulted the move, adding that it is recklessly undermining the party they claim to serve, and also, weaken the administration of President Muhammadu Buhari.

That sickness is old Ambition-virus 2023. This illness afflicts many in the political class along with their allies in the media. The carriers of this sickness are confused as to the very season our nation now finds itself.

They conflate things, which no sensible person would conflate. The primary symptom of their malady is the driving tendency to believe the events of 2023 will be decided before we even exit the year 2020.

He maintained that the plotters engaging in political manoeuvring is a major concern to note that they are prone to the 2023 virus.

Stressing further, Tinubu stated that Oshiomhole has been a tireless campaigner and mobiliser for the party and his contribution should not be undervalued.

The Chairman has been a tireless campaigner and mobilizer for the party. He has steered the party through difficult elections. His contributions should not be undervalued now that the bulk of elections are behind us. To do so would be an act of ingratitude.

It is no secret that the Chairman and Edo Governor Obaseki are in dispute. This is unfortunate. However, the party has moved through proper procedures within the proper organs of the party to hopefully resolve this spat.

The plotters launched their attack solely because they perceive the chairman as an obstacle to their 2023 ambitions. People went to court knowing full well the party constitution prohibits such action because these people had not yet exhausted all internal disciplinary procedures. We even had a national deputy secretary improperly call for a NEC meeting on the basis that he believed himself the acting national chairman.

Clearly, this man would not have summoned the temerity to make such a move had he not been instigated by powerful individuals who he thought would reward or, at least, protect him for committing the wrongful act, Tinubu said.

He added that those who have engaged in the moves believe they are clever and understand the political intrigue. He maintained that it is not yet time for 2023 politics to take centre stage in 2020.

This is the time for governance. It is not the moment to bring the politics of 2023 into 2020. In due course, 2023 shall come. Nothing can prevent it. However, that time is not today. If we are earnest, the present offers sufficient work and challenges for us without trying to add to it by rushing the future.

Tinubu called on all party members to dedicate energies to help President Buhari surmount the challenges facing the country and leave the 2023 frenzy and commit themselves to the harder yet more rewarding task of improving progressive governance, whether within the party or at the local, state or federal levels.FacebookTwitterWhatsApp