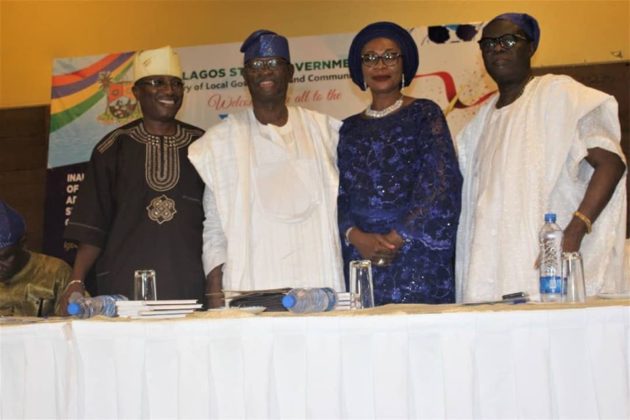 Lagos State Governor, Mr.Babajide Sanwo-Olu has extolled the zeal, passion and commitment of various Community Development Associations, CDAs and Community Development Committee, CDCs across the State, saying that the group had over the years exhibited high level of selfless service to the state government and their various communities.

He said that the fact that members of the group organised themselves in such an orderly manner and took ownership of government projects in their various domains without expecting any financial reward from government in return shows patriotic disposition that should be commended.

Addressing the newly sworn-in officers, Sanwo-Olu charged them to continue in the path of transparency, probity and accountability as already enshrined in the practice of the council over the years.

He implored the exco to ensure that the activities and self-help projects of the CDAs are in line with the T.H.E.M.E.S Agenda of the present administration in order to achieve the Governor’s vision of a Greater Lagos.

He added that the role of Community Development Associations majorly is to complement government developmental activities at the grassroots. “As development partner, I enjoin you to focus in this direction and to achieve this, you must engage and communicate with every member of your community on how to complement Government’s effort in our communities. He stated.”

While thanking the outgoing executive for serving meritoriously and for contributing in no small measure to the peaceful coexistence across communities in the Centre of Excellence, the Governor reminded them of how the present administration relies on them for quality governance, stressing that they are very integral in delivering dividends of democracy to all residents of the State.

The Permanent Secretary in the Ministry, Dr Taiwo Salaam in his welcome address appreciated CDA members and executive for the success recorded at the recently concluded election conducted.

He stated that the efforts of all CDAs and CDCs across the State has made the goal of bringing the government closer to the people possible, saying that Lagos today, boasts of over 3,900 vibrant CDAs.

Similarly, Cardinal Omolaja Odumbaku, a member of Governor’s Advisory Council and Life Patron, Lagos State Community Development Advisory Council, LSCDAC, while giving his speech thanked Mr Governor for the honour he has given to CDAs in the state by recognising and including them in the T.H.E.M.E.S. Agenda of his administration.

He commended Dr. Wale Ahmed for using the experience he has garnered over the years in grassroots politics to contribute immensely to the development of Lagos state.

He also appealed to them to ensure that resources garnered at the CDAs are used meticulously for the purpose they are earmarked for, thus contributing to the State Government’s Agenda of making Lagos State a 21st century economy.

Odumbaku who is the life patron of LSCDAC advised members of the various groups to cooperate with their local government Chairmen, saying, that is how they can get the needed support for their various projects at the grassroots.

Speaking on behalf of the outgoing executive, the Chairman of the LSCDAC, Alhaji Tajudeen Adeniyi Quadri thanked the State government for given them the opportunity to serve the state and for the unflinching support.

He pleaded with the state government to extend same support to the newly elected executives so that they can sustain the tempo of development at the grassroots and even surpass their own achievements.

The newly elected LSCDAC Chairman, Alhaji Azeez Amusat while giving his acceptance speech thanked the state government for the platform created for CDAs to relate with government, just as he appreciated the Ministry for conducting a free and fair election which brought about his emergence as the new Chairman of LSCDAC.

The Director, Community Development Department, MLG&CA, Mrs Sherifah Ewumi-Dosumu thanked the state government for its commitment to development at the grassroots.

She assured that her department through the Ministry of Local Government and Community Affairs under the leadership of the Commissioner, Dr Wale Ahmed, would work effectively to take Community Development Advisory Council in Lagos State to the next level of community development by giving continuous support and audience to all the CDAs.