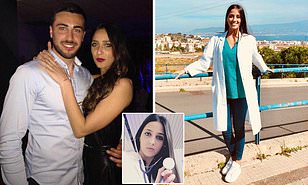 A nurse strangled his doctor girlfriend before telling police officers that he unleashed the attack because she gave him Covid-19, prosecutors say.

Student doctor Lorena Quaranta, 27, was found dead after her boyfriend Antonio De Pace allegedly called them to say he had killed her.

Both had been working in Messina, Sicily, but were drafted in to help out with the coronavirus outbreak.

Lorena will be awarded her medical degree posthumously as a tribute, Messina University says.

De Pace, 28, called officers to tell them that he had murdered his partner, according to reports in Italy.

Police then called paramedics because they found De Pace had cut his wrists and discovered him on the floor of the apartment, officers said.

He was saved by Lorena’s colleagues at the hospital and stunned police say he then told them: ‘I killed her because she gave me coronavirus.’

However, authorities are doubtful about his story. Early indications from testing carried out last night suggest that neither he nor his girlfriend had the virus.

De Pace has already been the target of a barrage of social media anger since the news of his girlfriend’s death emerged.

Six elderly nuns from the same Italian convent have died from coronavirus while another nine are in hospital after being infected.

Maria Annetta Ribet, 85, was the latest to die at a hospital in the commune of Tortona, in Italy‘s hard-hit north, on March 27.

An outbreak at Little Missionary Sisters of Charity was first reported on March 12, with 19 of the 40 nuns living there testing positive for coronavirus.

The sick were evacuated to be treated at hospital, while two sisters stayed behind to care for six others who did not have symptoms but have other health issues, the Catholic Herald reported.

The remaining nuns were placed under quarantine in a separate facility in case they develop symptoms.

The victims range in age from 82 to 98, with the first death reported on March 15.

Lorena had posted just days before her tragic death about 41 Italian doctors dying during the pandemic.

Linking to a news report on the deaths that have hit Italy due to a lack of personal protective equipment, she branded the situation ‘unacceptable’.

‘Now more than ever we need to demonstrate responsibility and love for life. You must show respect for yourselves, your families and the country,’ she wrote.

‘You must think and remember those that dedicate their lives daily to looking after our sick.

‘Let’s stick together everyone staying at home. Let’s avoid the next one falling sick is a loved one or ourselves.’

The 27-year-old was originally from Favara in Sicily, but the couple had lived together for the last few months in Messina where she died, Italian media says.

Salvatore Cuzzocrea, the dean of Messina University, told Giornale di Sicilia that Lorena would be awarded her medical degree posthumously as a tribute.

Cuzzocrea said he would speak to the family about how to hand over the degree, saying it was a difficult time for Lorena’s relatives.

De Pace, who is originally from Vibo Valentia in Calabria, had just weeks ago posted a tribute to his girlfriend following her qualification as a medic.

He wrote: ‘To reach our dreams you have to work hard with determination and you are proof.

‘I wish you to keep chasing your dreams, always live the life you always imagined. Well done! Congratulations on your brilliant graduation doctor.’

Italy sees number of deaths rise by its lowest in almost a week – 727 – but number of new infections sees sharp spike with 4,782 new cases

The percentage rise in daily deaths in Italy – 5.8 per cent – is also the lowest since the crisis began in the country.

However, the number of new cases rose more sharply than a day earlier, growing by 4,782 against a previous 4,053, bringing total infections since the outbreak began to 110,574.

In Lombardy, the epicentre of the outbreak, the daily tallies of deaths and cases were both up compared with those the day before, reversing the recent trend.

Italy has registered more deaths than anywhere else in the world and accounts for around 30 per cent of all global fatalities from the virus.

Of those originally infected nationwide, 16,847 had fully recovered on Wednesday, compared to 15,729 the day before. There were 4,035 people in intensive care, up from a previous 4,023.

Meanwhile, critics warn the Italian government is falling seriously behind on strategies to lift the punishing nationwide lockdown and reboot the economy.

Poverty and unemployment numbers are already skyrocketing and analysts have warned the eurozone’s third-largest economy will suffer its worst recession in decades, contracting six percent in 2020 should the lockdown last through to May.

‘It’s horrible to have to choose between putting the economy in a corner or exposing many people to the risk of dying,’ US expert Paul Romer told Italy’s Fatto Quotidiano daily Wednesday.

The government needs ‘a credible plan to revoke the shutdown very soon, while guaranteeing the safety of workers even if the virus is still present,’ said the co-winner of the 2018 Nobel Prize for Economics.

The torrent of Italian death data reveals that the region around Milan with a population of 10 million reported almost as many coronavirus fatalities in March as it would normally have done from all other causes.

It registered 12,399 COVID-19 related deaths last month – thousands more than officially reported by any other country.

But the tolls being read out daily by health officials in Rome can often seem hard to quantify.

Italian officials acknowledge that their coronavirus data are incomplete with deaths from COVID-19 related causes outside hospitals often not counted.

The number of people who died after catching the virus without ever being tested is unknown.

So is the number of people who died of other causes because they could not get treatment from hospitals dealing with a ceaseless flow of COVID-19 patients.

Some newspapers are asking why jumps in March deaths reported individually by some cities do not appear to be reflected in the national tally.

‘The death count does not add up,’ the Il Fatto Quotidiano said Wednesday.