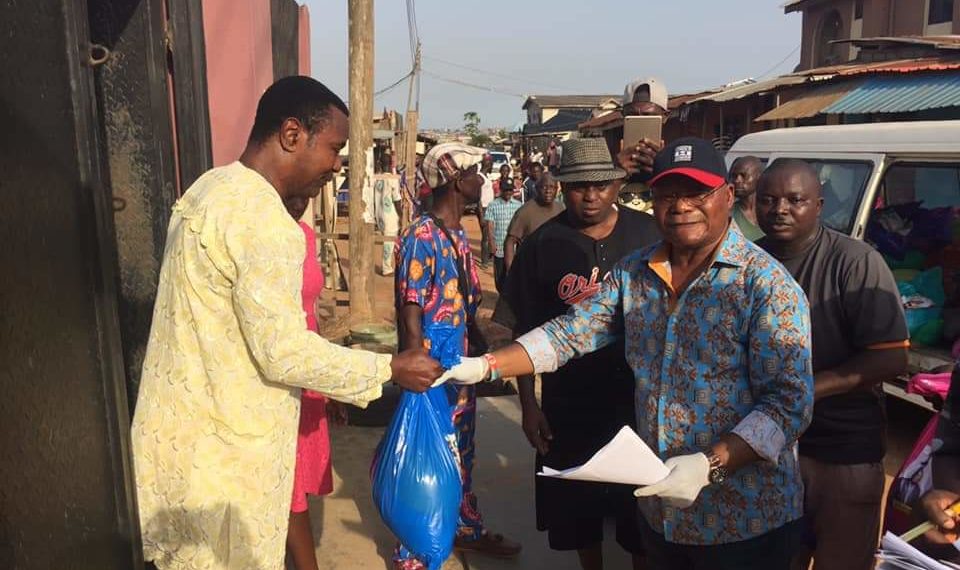 As part of his effort to provide succor to the less privilege residents of Ifako-Ijaye Local Government following the observation of the sit at home order by the federal government in three States namely Lagos State, Ogun State and the Federal Capital Authority, Abuja, its chairman, Apostle Oloruntoba Oke has distributed food items to cushion the effect of the lockdown on his residents.

Oke, who personally distributed the packages which included rice, beans, semovita and  gari  did a house to house round of his ward last Sunday to deliver the relief materials to the residents.

Not less than 2000 packages of the items were doled out to the less privileged people in the whole of the local government with each councilor taking his or her share to deliver in his or her ward.

The council chief who was with his wife, Pasor( Mrs) Oke and other executive members of the local government pleaded to the residents to obey the order of the federal government and the State government, noting that the 14- day lockdown is for the safety and welfare of Lagosians and Nigerians as the step taken is done in their interest.

He added that the observation is not only in Nigeria but other parts of the world such as United States of America and United Kingdom.

He continues “We must comply totally with the restriction order, the precautionary measures afforded to contain the spread of the virus by government is for the good of all.

He added “The only thing that could be done to stop the spread is for people to sit-at-home.

” This is not only applicable in Nigeria alone but in other climes all over the world, Britain and United States are no exception ,it is total lockdown, so people should comply with whatever instructions or precautionary measures by the state”.

He explained further that the provision of the relief measures was an agreement between himself, the management and the councilors to mitigate the effect of the stay at home ordered by both the State and Federal governments within the residents of the area, noting that each of the councillor should man his or her ward to distribute the relief materials to the vulnerable people in their area

However, the distribution which cuts across all the wards were done simultaneously when that of the council chairman was on-going. The areas involved are Ogba, Ifako,  Ifako Titun, Agege Low Cost Housing Estate, Coker, Olufemi Ajayi, Obawole, Iju, Balogun, Iju Ishaga, Ogundimu and Ajuwon.