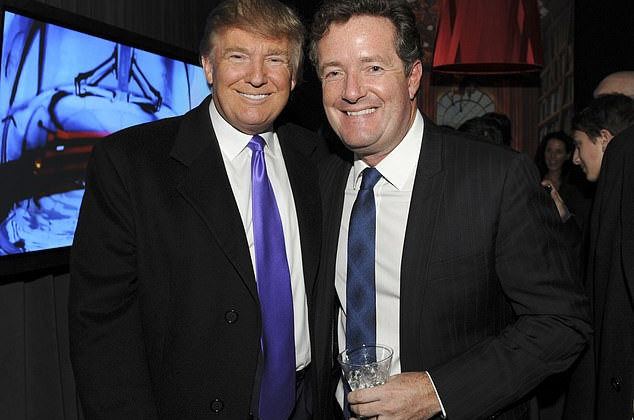 Daily Mail Columnist, Piers Morgan has ended his 15-year friendship with Donald Trump with a brutal open letter to the US president after Trump unfollowed him on Twitter for criticizing his approach to the Coronavirus.

Recall the Good Morning Britain host wrote an article, where he told Trump to ‘shut the f**k up’ because his approach to the Coronavirus pandemic was ‘batsh*t crazy’.

Read his open letter below.

On Friday evening, you unfollowed me on Twitter, which given you only follow 47 accounts was not an insignificant decision.

It came a few hours after I posted a column in which I lambasted you for using your daily Coronavirus press briefings to air ‘batsh*t crazy’ cure theories like ‘injecting or ingesting’ bleach into patients with COVID-19.

I used very forceful language to convey my dismay at such reckless, shocking and woefully irresponsible behavior.

Indeed, the column began with the words ‘SHUT THE F**K UP, PRESIDENT TRUMP!’

And for that, I make no apology.

You are the most powerful person in America and your words carry enormous weight and consequence. Within hours of you suggesting it might be a good idea to use bleach, one public health hotline in one state – Maryland – received 100 phone calls asking about whether they should use household detergent to combat the virus, and was forced to issue an alert warning people not to try it.

New York City’s Poison Control Center took 30 similar calls from the moment your briefing last Thursday night ended to 3pm the next day – and was also forced to release an alert saying that using bleach ‘can put people at great risk.’

This latest debacle came after you previously and repeatedly hyped up an anti-malaria drug, hydroxychloroquine, as another ‘cure’ – until it turned out to cause more deaths in COVID patients than those who weren’t treated with it.

This is a terrifying illustration of how dangerous your rhetoric can be.

So yes, I think when it comes to floating mad ideas about potential ‘cures’ for coronavirus, you should shut the f*ck up.

I can understand why such direct language from a long-time friend may have offended you, and I understood that when I wrote it. You have a notoriously thin skin and take any criticism very badly.

(Though, from personal experience, I don’t think you’re a stranger to deploying such profane terminology yourself when something angers you.)

But I’ve always believed the best friends are ones unafraid to offer blunt unvarnished criticism to someone who is behaving in a shockingly self-destructive way, especially when that person is the President of the United States during a global pandemic.

We’ve known each other 15 years, and I’ve always tried to be fair and balanced when it’s come to your presidency. I criticize you when I think you deserve it (I’ve written 55 critical columns about you) and I support you if I think you’re right.

That makes me an outlier in current media, the vast majority of whom either implacably criticize you or blindly support you.

But if you can’t handle my criticism, and our friendship is over, then let me mark the end of our relationship with a few home truths about your spectacularly bad handling of this crisis that may yet, if you heed them, still enable you to get re-elected in November.

1) Get serious, very serious. The world leaders that are seeing their approval ratings soar – including Germany’s Angela Merkel, New Zealand’s Jacinda Arderne and France’s Emmanuel Macron – are the ones who realized early on this was going to be the biggest crisis in their country’s modern history and have adjusted their behavior accordingly. Nobody wants to see or hear their leader playing the buffoon when thousands are dying from a terrible virus. They want a gravity that reflects the reality.

2) Show some damn empathy and compassion. You’ve barely mentioned, in any of your long rambling briefings, the terrible impact of this coronavirus on the American people.

In fact, the Washington Post calculated that you’ve spent just 4.5 minutes expressing any condolences, in over 13 hours of talking from the podium. More than 55,000 Americans have now died. Their relatives, friends and co-workers want to hear that you care about them. So, show them that you do, every day. Tell some of their stories, and those who’ve survived too. We need hope amid the despair.

3) Stop warring with the media. There can be no more important job for any journalist than holding a government’s feet to the fire during such a massive crisis where so many lives are dependent on the right decisions being made. The way you’ve been abusing the media during your briefings is repulsively rude and undignified.

Remember the words of President John F. Kennedy about freedom of the press: ‘Without debate, without criticism, no Administration and no country can succeed. That is why our press was protected by the First Amendment – the only business specifically protected by the Constitution – not primarily to amuse and entertain, not to emphasize the trivial and the sentimental, not to simply “give the public what it wants” but to inform, to arouse, to reflect, to state our dangers and our opportunities, to indicate our crises and our choices, to lead, mould, educate and sometime even anger public opinion.’ If you want the press to show you respect, then start showing them some.

4) Cut the briefings to a maximum of 45 minutes and don’t speak yourself for more than 10 minutes. Nobody wants to hear a daily free-wheeling campaign rally other than you and your die-hard base supporters. In a hideously unedifying way, you keep boasting about your brilliant ratings for the briefings, but the only reasons so many are tuning in are because either they’re scared and want accurate information and reassurance. Or because they love car crash television.

At the moment, you’re offering plenty of the latter and none of the former.

5) Tell the truth. In a public health disaster of this magnitude, truth matters more than ever. Yet you’ve offered false or misleading information in 25% of your remarks. This is completely unacceptable in a president during the best of times, but during a crisis like this it’s outrageous. It’s particularly self-defeating when you lie about something that we’ve seen with our own eyes like the bleach moment. It wasn’t ‘sarcasm’, as you claimed later, and you weren’t addressing it to the ‘fake news’ – we could see you asking your experts. So, when you try to excuse your horrendous error like that, you reveal yourself, ironically, to be the purveyor of fake news.

6) Stop constantly praising yourself. It’s nauseating at a time like this. Apart from the fact you don’t deserve much praise for your performance in this crisis due to America’s horribly slow response to the virus and chronic lack of preparedness, it is so diminishing for you to stand there for hour after hour telling us how great you are and what a perfect job you’re doing as America’s death toll rockets ever higher. Macron admitted to his people that his administration had made mistakes in the preparation for this kind of pandemic, and the French people loved his candour. Learn from that; a little humility in your case would go a very long way right now.

7) Leave medical statements to the experts. There have been few more absurd spectacles than watching you at the podium theorizing about any new crazy coronavirus theory you’ve just heard, like you’re Dr House. You’re not a doctor, as you admitted last week. So, stop pretending to be one.

8) Cut tweeting so much irrelevant crap. Last night you embarked on a cringe-making and pitifully petty tweet storm (much of it now deleted) against the media, demanding journalists give back their ‘Noble prizes’. As I pointed out in my reply, it’s ‘Nobel’ and the prizes you were alluding to are Pulitzers. But who the hell cares anyway? There is only one thing you should be laser-focused on right now and it’s how to defeat coronavirus before it slaughters more Americans.

9) I don’t want to hear any more from you about how hard you’re working. I expect, and every American will assume, that the President of the United States is currently working as hard as he possibly can on the biggest crisis to hit the country in modern times. Again, reign in the overly-defensive self-justification and self-aggrandizing, it just irritates people who are suffering massive problems.

10) Forget about the bitter and twisted partisan politics that dominated and scarred your presidency to the point when coronavirus erupted. Everything’s changed. We all have a common enemy now, and it’s one that doesn’t recognize a republican from a democrat. You should be bringing your opponents to the White House and presenting a united front, not continuing to mock and belittle them.

Mr President, nobody pretends that any of this is easy. There can’t be anything worse for any leader than seeing a new, wicked virus ravage the country, killing tens of thousands of people, and the economy suddenly tank to the worst levels in US history.

These are scary times and millions of people are suffering very badly. But you’re making it worse with your dangerously erratic conduct.

And if you continue, it will cost you the election.

Chancellor Merkel is someone whose crisis leadership is a template for what you should be doing.

Germany’s top coronavirus scientist Christian Drosten explained her popularity today in the Guardian: ‘She’s extremely well-informed, it helps that she’s a scientist and can handle numbers. But it mainly comes down to her character – her thoughtfulness and ability to reassure. Maybe one of the distinguishing features of a good leader is they are not using this situation as a political opportunity. They know how counter-productive it would be.

You’ve dug yourself into a horrible hole, Donald, and you’re making it deeper with everything you do and say.

However, if you heed my advice, and begin to guide the country through its darkest hour with a more serious, consistent, determined and empathetic style, then I believe there is still a chance the American people will forgive you and reward you with re-election later this year.