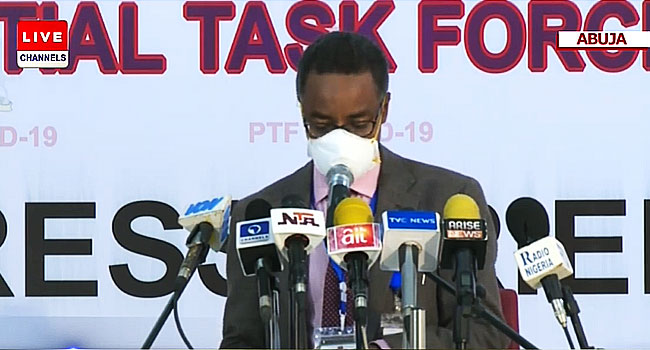 The Federal Government has warned that anyone found moving about without a facemask will be prosecuted, giraffeglobal reports.

This was disclosed in a document by the Presidential Task Force (PTF) on COVID-19 on Friday, as part of the guidelines it released for the implementation of the phased and gradual easing of the lockdown.

The five-page document which was signed by the PTF Chairman and Secretary to the Government of the Federation, Boss Mustapha, also noted that anyone found with a temperature above 38ºC will be mandated to return home.

“Anyone who presents a temperature of above 38ºC will be mandated to return home and call NCDC for evaluation,” the statement read in part.

It added: “Anyone without a face mask/covering will be asked to return home and will be prosecuted.

“Any member of the public who violates the ban on Inter-State movement as outlined in this guideline will be prosecuted.”

President Muhammadu Buhari had ordered the lockdown in Lagos and Ogun States, as well as the Federal Capital Territory (FCT), as part of measures to curb the spread of the disease.

He, however, announced in his broadcast on Monday that there would be a gradual easing of the lockdown in the three cities from May 4.

The PTF has urged Nigerians who do not have any important reason to be out, to stay indoors as the fight against the COVID-19 is yet to be over