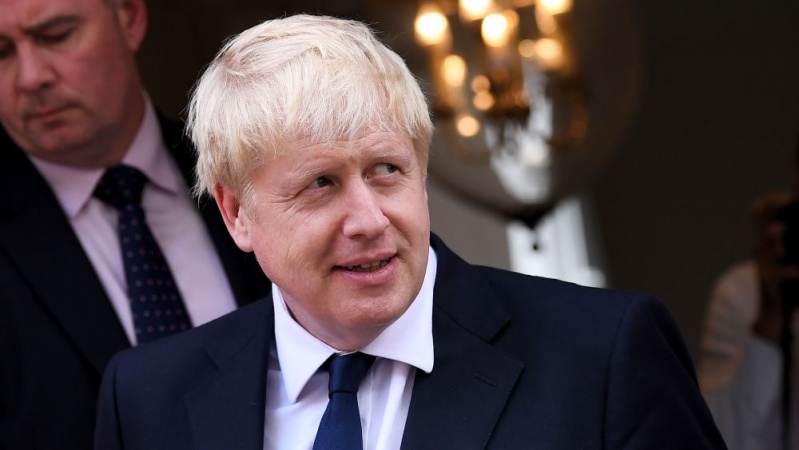 London (CNN) – Boris Johnson has called on people across the UK on Sunday to return to work if they cannot do so from home, as the Prime Minister laid out his vision for gradually restarting the economy.
The government’s previous stance was that people should only go to work “if they must,” Johnson said. “We now need to stress that anyone who can’t work from home, for instance those in construction or manufacturing, should be actively encouraged to go to work.”
Also from Wednesday, people in the UK will be able to sunbathe in their local parks, exercise as much as they want and drive to other destinations, he said.
In a pre-recorded televised statement on Sunday evening, Johnson unveiled a road map to resuming activity in the country following more than six weeks under lockdown. He characterized his plan as a cautious balance between keeping new infections down while easing the economic burden the pandemic has had on millions in the UK.
Until Johnson’s announcement, residents whose jobs were considered non-essential were advised to leave home only for local exercise once a day and to buy food or medicine.
“From this Wednesday we want to encourage people to take more and even unlimited amounts of outdoor exercise,” he said, adding that social distancing measures would stay in place.
“You can sit in the sun in your local park, you can drive to other destinations, you can even play sports but only with members of your own household.”
Johnson announced several other new measures:
• People returning to work should avoid public transport where possible.
• Quarantining people entering the country by air would come into place “soon.”
• A new five-tier alert system, like one the UK uses for terror threats, will be employed by a biosecurity center.
• The advice and slogan “Stay at home” to save lives is now “Stay alert.”
• Primary schools could open from June 1, but that is the best-case scenario.
• More shops and the hospitality sector could reopen in July, depending on circumstances.
Keir Starmer, the leader of the main opposition Labour Party, said that Johnson’s statement lacked the clarity the nation was looking for.
“The basic message, stay alert, just isn’t clear enough and the Prime Minister’s statement raises just as many questions as it answers,” he said in remarks to the BBC.
“I think there are real problems here. Basically, those that can’t work at home are being told to go to work tomorrow. That’s millions of people and that means go to work in about 12 hours’ time, mixed with the message that if it’s possible to do so, don’t use public transport — that’s quite a thing to spring on people for tomorrow morning.”
The message to “stay alert,” which Johnson announced earlier Sunday on Twitter, has been met with criticism, and ridiculed on social media, for its vagueness.
Lack of unity across country
The government’s new messaging and advice has also put it at odds with the United Kingdom’s smaller three nations.
Wales, Scotland and Northern Ireland have extended their lockdowns to May 28 and officials from all three nations said there had been no coordination between their governments and Downing Street over the new messaging, and they would continue to spread the “stay home” message among their own people.
Scottish First Minister Nicola Sturgeon, who described Johnson’s new slogan as “vague and imprecise,” said on Sunday that people in her nation could begin exercising more than once a day from Monday, but all other lockdown rules would be retained.
“I have asked the UK government not to deploy their ‘Stay Alert’ advertising campaign in Scotland, because the message at this stage in Scotland is … except for the essential reasons you know about, stay at home,” Sturgeon said Sunday.
“We must not squander our progress by easing up too soon, or by sending mixed messages that result in people thinking it’s okay to ease up now. Let me be very blunt about the consequences if we were to do that: people will die unnecessarily. We must not take that risk,” she added.
The United Kingdom is one of the world’s hardest-hit nations in the pandemic. More than 31,000 people have died, according to government data.
In his address, Johnson sought to present the plan as one with the backing of the kingdom’s four nations, saying he had “consulted across the political spectrum, across all four nations of the UK.”
“I believe that, as Prime Minister of the UK — Scotland, England, Wales, Northern Ireland — there is a strong resolve to defeat this together and today, a general consensus on what we could do,” he said.
Johnson is expected to give more details of his road map in parliament on Monday, where he will no doubt face tough questions from MPs over his new messaging to the public.
It’s not the first time the UK government has been criticized for its confusing communications during the pandemic. Johnson telegraphed earlier this week that he hoped some changes to the country’s lockdown announced Sunday would go into effect as quickly as Monday.
His lack of details on what measures might be relaxed spurred a flurry of speculation in British media.
The suggestions that Monday may bring new freedoms appears to have emboldened people in London: hundreds were photographed in parks sunbathing and having picnics as sunny weather tempted them to break lockdown rules over the weekend. Police said they were forced to disperse groups drinking beer and wine, and sharing pizza.
TM & © 2020 Turner Broadcasting System, Inc.
A WarnerMedia Company.
All Rights Reserved.