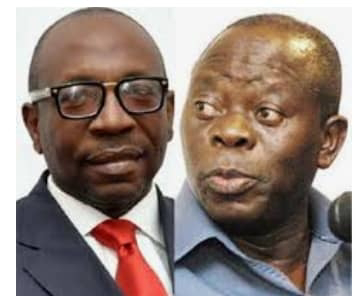 The Ojirua of Irrua in Edo State, HRH Williams Okuagban, Momodu II, has condemned Governor Godwin Obaseki over last week’s invasion and vandalism of the state’s House of Assembly complex.

He described the incident, which saw unknown persons embark on the removal of the roof of the House of Assembly and other acts of vandalism, as sad and a waste of government resources, considering that state’s funds would be spent on repairs and rebuilding efforts.

The monarch stated these Tuesday in his palace, while receiving Edo governorship candidate of the All Progressives Congress (APC) for the September 19 election, Pastor Osagie Ize-Iyamu.

He gave an open endorsement of Ize-Iyamu by addressing him as the next governor of Edo state.

The traditional ruler said: “I welcome you, my governor. Your visit here is just to further familiarise yourself with our people, as you have already been chosen.

“Not too long ago, I watched on television as the President (Muhammadu Buhari) handed over the party’s (APC’s) flag to you. I was not there, but what I did in my room was to clap my hands.

“This is our son; he is going to be the next governor. I am the owner of Esan land. I will be celebrating 50 years on the throne next year June. I am sure this governor, Pastor Ize-Iyamu, is going to be my chairman.”

The king also hailed the governorship candidate of APC for the presentation of his documented manifesto, the SIMPLE agenda, stating that anyone desirous of leadership must present a manifesto and roadmap to inspire trust and give room for assessment.

Ize-Iyamu, in his remarks, expressed gratitude to the monarch and the people of Irrua for their acceptance, promising to run an administration respectful of the traditional institution and partner with all traditional rulers in Edo to address the security challenges of the state.

The campaigns of the governorship candidate of APC have elicited excitement in Edo Central Senatorial District, since the first stop in Igueben Local Government Area on Monday