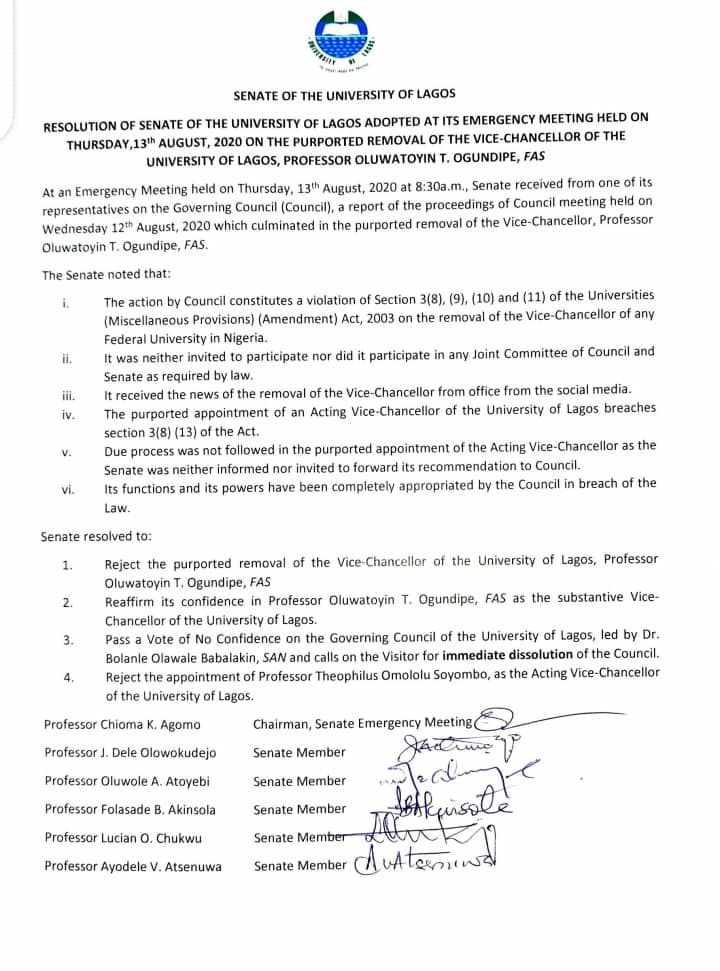 From the analysis of the votes received by TheConscienceNG as claimed by the Pro-Chancellor to have sealed the fate of the embattled Vice Chancellor, Professor Oluwatoyin Ogundipe, there are obvious discrepancies as six of the voters insisted they had voted in favour of the Vice Chancellor, leaving only 5 valid votes from the 11 votes declared by the Pro Chancellor.

As members of the governing council that voted at the emergency meeting began to speak up, it can be deduced that majority voted against the removal of the vice chancellor which led to the UNILAG crisis.

According to Professor Afolabi Lesi who made a statement titled update on the meeting of the Governing Council on behalf of the senate representative council, six persons out of 11 persons that voted have given information that they voted against the removal of the vice-chancellor.

It was also revealed that those who voted against the Vice Chancellor asked for his suspension apparently for proper investigation and not removal of Ogundipe and the avoidable UNILAG crisis.

Said Leshi, “Fifteen members attended the Council meeting physically ad virtually and two were asked to leave, the Vice Chancellor and the Deputy Vice Chancellor (DS). Thirteen members had the opportunity to vote, even though Dr. Wale Babalakin did not vote (as stated by him), leaving twelve (12) members.

Also, from further information, one person abstained from the voting processing:
Prof. Eddy Omolehinwa (Representative of Senate, UNILAG)However, the very first vote message that Dr. Wale Babalakin read out as having received was ONE SUSPENSION.

From the recount so far, the suspension vote is from one of the following:
Alhaji Hussain Ali (Former Commissioner)Oluwarotimi Sodimu Esq (Representative of Congregation, UNILAG)Dr. Saminu Dagari (Senior Lecturer of Chemistry, Federal University, Gashua)Dr. Bayo Adaralegbe (Babalakin’s Chamber)Revd Yomi Kasali (Senior Pastor, Foundation of Truth Assembly)Therefore, what is remaining is four (4) persons, who voted for the removal of the Vice Chancellor.

If the analysis above is anything to go by, Six persons voted against removing VC while 4 voted for his suspension.

How this votes justify his removal as VC beats logic as the UNILAG crisis thickens.