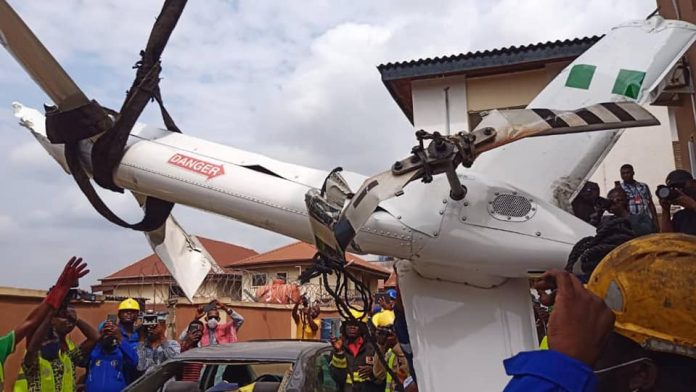 The Executive Chairman Onigbongbo LCDA, Hon Oladotun Olakanle, has commiserated with families, relations, and friends of those who lost their lives in a helicopter crash on Friday at Salvation area of Opebi within the Onigbongbo LCDA of Ikeja.

The helicopter belonging to Quorum Aviation crashed into a building in Opebi area of Lagos State.

The Chairman While calling on the Accident Investigation Bureau (AIB) and the Nigerian Civil Aviation Authority (NCAA) to investigate the cause of the crash, so as to avert future occurrence.

Hon Olakanle prays that Lord God console the families of the victims of the crash and grant the deceased eternal rest.

“I pray God console the families of the victims of the Opebi helicopter crash and grant the deceased eternal rest” the council chairman prayed.

The pilot of the helicopter that crashed into a residential at Opebi, Ikeja on Friday tried in vain to avoid causing many casualties, witnesses said.

The pilot who eventually lost his own life had apparently targeted an open space in the area for emergency landing when he sensed trouble, only for the aircraft to crash into 16A, Salvation Road.

One other person in the Bell helicopter 206B3 also died immediately while the third victim, who was said to be the engineer of the ill-fated helicopter, died at the intensive care unit of the Lagos State University Teaching Hospital (LASUTH) where he was admitted after he was rescued from the accident scene.