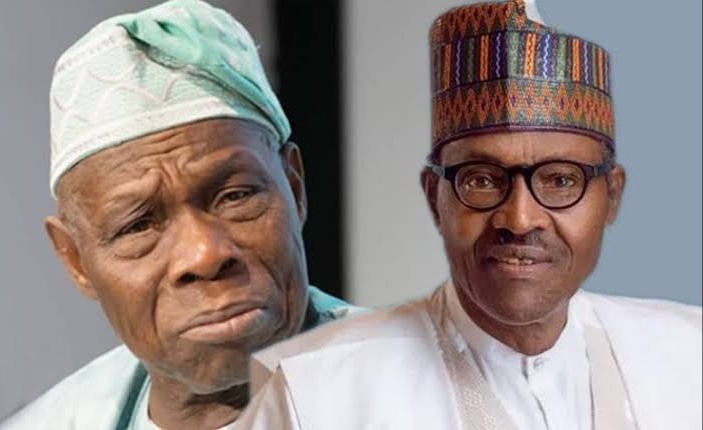 Former President Chief Olusegun Obasanjo Friday raised that alarm that Nigeria is fast drifting to a “failed and badly divided state” under the administration of President Muhammadu Buhari.
Obasanjo, who spoke at a closed door interactive session, tagged, “A Consultative Dialogue” in Abuja said, it was regrettable that economically, Nigeria was becoming “a basket case and poverty capital of the world and socially an unwholesome and insecure country”.
He blamed the Buhari-led administration for mismanaging the diversity and socio-economic development of the country.
Obasanjo said: “Today, Nigeria is fast drifting to a failed and badly divided state, economically our country is becoming a basket case and poverty capital of the world, and socially, we are firming up as an unwholesome and insecure country.
“And these manifestations are the products of recent mismanagement of diversity and socio-economic development of our country.
“Old fault lines that were disappearing have opened up in greater fissures and with drums of hatred, disintegration and separation and accompanying choruses being heard loud and clear almost everywhere.
“It would appear that anybody not dancing to the drum beat nor joining in chorus singing would be earmarked as ethnically unpatriotic or enemy of its tribe or geographical area. In short, the country is fast moving to the precipice. But happily, I observed that the five socio-cultural political groups gathered here have been getting together to find common ground, areas of agreement or accord for moving Nigeria away from tipping over.
“Before continuing, let me say that we must remind those who are beating the drums of disintegration and singing choruses of bitterness, anger and separation that if even Nigeria is broken up, the separated parts will still be neighbours. And they will have to find accommodation as neighbours or they will be ever at war. And those who prevent justice to be done invite violence to reign.”
He called for a national dialogue insisting that only a national dialogue could save Nigeria from disintegration.
Obasanjo said: “I believe one of our major problems in the past was that we did not dialogue enough, we talk at ourselves and selfishly, keep old prejudices and biases. If we show understanding, give-and-take, love of one another and commitment and love of the country, we will do what is right and stand firmly together for the good of all.
“Frustration leads to desperation and nobody can be sure of what desperation can lead to. We are here to start the process of putting those other measures together and to continue to enlarge the circle from this mini-dialogue group bit by bit until a national dialogue that can save Nigeria from disintegration is reached and when that is done, this initiative will come to an end.
“I believe Nigeria is worthy saving on the basis of mutuality and reciprocity and I also believe it can be done through the process of dialogues rather than talking at each other or resorting to violence. It will amount to dangerous and destructive self-delusion for anybody to claim that all is well in Nigeria today.
“With what I have seen, read and heard from the rapprochement that you are forging together, I see a ray of hope that Nigeria can be saved from disintegration.
“If we are ready to live together in understanding, mutual respect and love with equity, justice, inclusiveness while engendering sense of belonging and unity of purpose and all hands on deck, we can deal with internal issues of terrorism, organised crimes, banditry, kidnapping, human trafficking, drug, money laundering and corruption.
“We will then be able to deal successfully with any incoming attack of terrorism, organised crimes, etc, from outside.
“Today, that is a sure threat dangling over the heads of all of us, no matter our tribe, religion, geographical location, social standing, age or gender.”
The former President also called for the review of the 2005, 2014 National Confab.