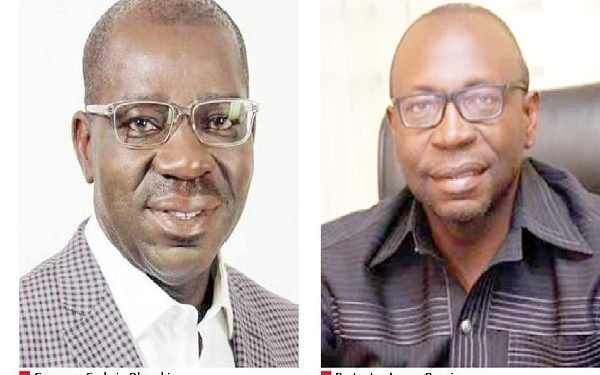 By Raymond Mordi and Tajudeen Adebanjo

He also failed to debunk the claim that he did not possess the requisite qualification for admission into the University of Ibadan where he graduated.

It was during a debate organised by Channels Television and its partners to enable Obaseki, the Peoples Democratic Party (PDP) candidate and Pastor Osagie Ize-Iyamu, the All Progressives Congress (APC) contender, to sell their candidature to the people.

The Edo State governorship election will hold on Saturday.

Ize-Iyamu said Obaseki has not performed and that he borrowed millions of naira on account of the agriculture sector without any result.

He also chided the governor for failing to employ teachers when there are no teachers in the classrooms while no doctor was hired in the absence of medical personnel to work in the hospitals.

He said the government closed down the nursing school, raising the fear of lack of nurses in the state in the near future.

Ize-Iyamu said firms in Sobe and Wareke, among others, are neglected.

He said the state’s stake in the modular refinery under construction was a mere one per cent.

On security, Ize-Iyamu said: “We can combat human trafficking, if we make the home environment more conducive and curb the rural to urban drift. There are laws in place and the Federal Government is doing a lot to reduce it.

“The personnel deployed in our state for combating insecurity will be complemented by an organised state police, but we must work with the Federal Government and every other stakeholder. Our people must feel safe at all times.

“Kidnapping is high in the state. We are not showing enough concern. If I were governor, I would have acted on veritable intelligence and mobilised security agencies to flush them out of the forests around Okada-Ofosu road.

Obaseki said the state was working closely with the Federal Government to reduce the crimes.

“We have software in government, which we use to track crime and monitor trends. We have deployed this a couple of times, especially when kidnapping was rife in the Okada-Ofosu-Ore axis. We cleared both sides of the forest and collaborated with federal authorities to bring sanity.

“We have young men that are providing intelligence on what is going on in their areas. This has helped to tame cult groups in communities. We call them Public Work Volunteers,” he said.

Ize-Iyamu accused the governor of bandying fake statistics on employment in the state.

According to him, most schools and hospitals do not have teachers and doctors.

“Eight of 10 graduates in Edo State don’t have jobs. There is unemployment in the state. The governor was just releasing fake statistics. The little jobs available were given to outsiders,” he said.

Ize-Iyamu added: “My fellow contestant is not worried about the brain drain in the medical sector. This is, according to him, because he wants to do e-diagnostics.

“Mr Obaseki did not know of the Stella Obasanjo Hospital, which was built over 12 years ago. So, what was he doing when he was in government? He does not even know what is happening in the state.

“I am shocked that the state’s School of Nursing and Midwifery has been closed. The danger is that we will be going outside our state to look for nurses to help our mothers in labour.

“The government has spent around N16 billion to train teachers, but how has this improved education in the state?”

Obaseki said the data records were available for verification and denied spending so much.

He admitted that there were challenges in the area of employment.

“Human capital development is one of the areas that the government has accomplished a lot. Jobs came from the way government addressed the problem by creating a sense of purpose to encourage the private sector to participate,” he said.

Obaseki accused his predecessor, Adams Oshiomhole of borrowing recklessly during his tenure, saying he put the state in a debt burden of N120 billion.

“We have been able to service the debt to ensure that the state can survive,” he said.

But Ize-Iyamu reminded Obaseki that he was the Chief Economic Adviser to Oshiomhole for eight years.

According to him, the promises made by Obaseki in the areas of agriculture and security were not fulfilled.

“He has borrowed lots of funds with nothing to show for them. My contestant has collected over 75 billion in debts. What did he do with them? All his promises remain unfulfilled, despite the fact that he came in when there was high windfall in Edo,” he said.

Ize-Iyamu said the N2 billion the state invested in Sobe farm by partnering with Saro farms, has not yielded any meaningful result.

“The governor made what I might call a very lame attempt and he failed completely and we are in a very sorry state. During Christmas for example, people were going to Abakaliki to bring rice, they were going to Kebbi to bring rice.” Obaseki faulted the figure but did not mention the amount he spent.

On his certificate, Obaseki said it was ironic for somebody who has no certificate to comment on the certificate issued to him by the University of Ibadan (UI) in 1976.

“I studied in the Faculty of Arts and the university has said I graduated from the institution. It is very sad that in a country like Nigeria, some people who do not have the qualifications, have the effrontery to challenge the qualification of those who went to proper schools. That is a very sad situation that we have found ourselves,” he said.

But Ize-Iyamu fired back, he said: “We do not doubt that you attended the university. The issue is, you failed school certificate. You had no English and Maths, which will make it difficult to enrol for A Level. And if you got A Level, why is it that you’ve not been able to present the A Level, where is the result? You had only three credits without Mathematic and English. That is a moral question. A lot of people are looking up to you as a governor and as a leader.

“Your disqualification by APCarose from information, your party now the PDP, provided. Because the PDP, when I was contesting against you (in 2016) said you have no results. Why have you not answered the question? Where is your result?” The governor did not respond to this claim.