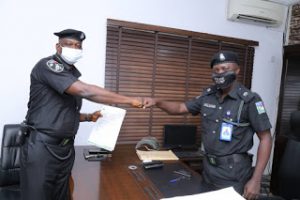 Former spokesperson of the Ogun state police command, Muyiwa Adejobi, has been appointed as the new Police Public Relations Officer [PPRO] of the Lagos State Police Command by The Nigeria Police Force.

Adejobi who  bagged his BSc in Archaeology and Geography (Combined Hons) in 2001 from the University of Ibadan and MA in Peace and Conflict Studies in 2004 in the same prestigious University of Ibadan before he was appointed in the Nigeria Police Force as a cadet Assistant Superintendent of Police had previously served as the spokesperson of Zone 2 headquarters, Onikan, Lagos, and has many certifications and awards under his belt.

The new PPRO assured the general public of his commitment to duties and responsiveness to issues that can promote effective policing, protection of human rights and sustainability of justice across board in the state, in line with the policing agenda of commissioner of police in Lagos.

However, the outgoing PPRO, SP Bala Elkana, briefed the press and his successor before departing to his new designation.

Briefing journalists, Bala Elkana said the new Police Public Relations Officer has “assured the general public of commitment to duties and responsiveness to issues that can promote effective policing, protection of human rights and sustainability of justice across board in the state, in line with the policing agenda of the Commissioner of Police Lagos State.”

While appealing to the media to give Adejobi maximum support , Bala expressed his unshakable confidence in Adejobi’s ability to perform and assured that public relations in Lagos will be taken to the next level.

Adejobi, who took over from Bala Elkana however assured Lagosians that he would ensure the prompt exchange of accurate information with the media in order to get the desired positive result.

He is expected to bring his experience as a former PPRO of Ogun State and zone 2, which comprises Lagos and Ogun States to a new height with the public and journalists .