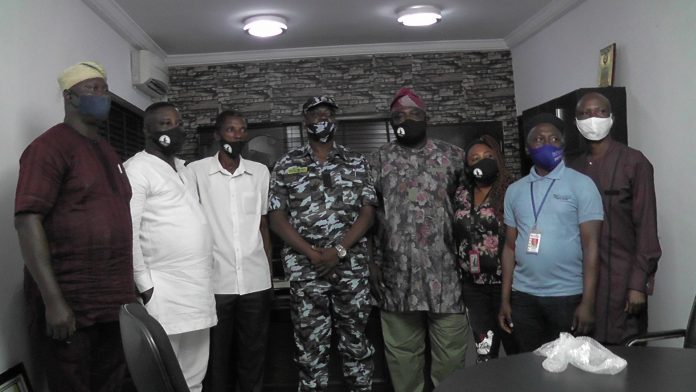 The Executive Members of the Community Media Practiti

oners Association (COMPASS) of Nigeria has commended the Federal Government for finally approving the take-off of Community Policing and promised to galvanize all members of the association in the 20 local governments and 37 local council development areas of Lagos state to support the initiative so as to strengthen security apparatus.
He made this statement during a courtesy visit of the COMPASS executive to the new Lagos Police Public Relations Officer (PPRO), SP Olumuyiwa Adejobi at the Lagos State Police Headquarters, Oduduwa, GRA, Ikeja, Lagos.

He averred that “the Community Media have a pivotal role to play in community policing, hence the need for us to be given the required recognition. We are the watchdog of our respective communities, we have our members across the 57 local councils of Lagos and we report daily activities in the local communities” Aderinola noted.

COMPASS leadership also commended the efforts of the Lagos State Commissioner of Police, Mr. Hakeem Odumosu, in curbing crime since he took over the saddle of leadership of the Command.

Aderinola described Odumosu as a true professional and hardworking CP who has helped to reduce crime in the state.

The Publisher/Editor of Lagos Panorama also commended the Police Chief for frontally leading the arrest of two domestic servants who allegedly attacked the Managing Director of a shipping company, Maersk Nigeria Limited, Gildas Tohouo Tohouo and his wife at about 2am in their Ikoyi residence.

Aderinola stated that “It was reported that CP Odumosu immediately ordered the Area Commander, Area A and the Divisional Police Officer, Ikoyi to condone off the entire area.

“From his car, the CP brought out an industrial touch light and a search on the entire area at about 2am shortly after the unfortunate incident”.

“Both suspects were dragged out from where they were hiding” he affirmed.

The Lagos PPRO, SP Olumuyiwa Adejobi, expressed his appreciation for the visit of the Community Media Practitioners Association Executives, noting that Public Relations is very important in policing.

He de-emphasised the belief in some quarters, especially among Lagosians that say an average policeman is bad.

Adejobi stated that “From my head to toe is all about public relations, I believe in achieving the desired goals in policing, public relation is very important”.

“Everything we do as police must be transparent. Complainant should have access to their case file and able to do follow up even when the IPO is no longer available”.

“A policeman must be accountable, responsible for their actions and inactions. Community policing will promote proactiveness, before a crime is committed, you nipped it in the bud. All these will be promoted under the concept of community policing”.

“No doubt as the forth realm of governance, the media have major roles to play in community policing, the role of the media and others is what I will call the Multi-track diplomacy for effective policing in Lagos state”.

“Government has a role to play and they have been playing it, the Lagos State Government has a platform, the Security Trust Fund, which has been very effective and supportive, in fact I urged every other states to replicate same”.

Religious leaders too should be encouraged to preach salvation rather than prosperity at all times. Job 1:21 says we have come to this world nakedly, nakedly we shall return” Adejobi buttressed with a bible verse.

Traditional rulers have a major role to play, as father to all in their domain, they must not support criminals in their domain against their kinsmen. They should realize that they don’t have immunity, but will be accorded respect”.

The State PPRO also urged the media to help in image building of the nation, advising that they should be diplomatic in some of their reportage so as to forestall negative image for the nation.

However, the COMPASS President and his team also pointed out at infractions of some members of the police force.

The Welfare Director of COMPASS, Jenifer Nwosu, Publisher of Badagry based Sky News, stated that the nefarious activities of police mounting several road blocks on the dilapidated Lagos/Badagry express way has brought more pain and hardship to commuters along that axis of Lagos.

She was also corroborated by Kayode Odujinri and Adewale Ogunniran, COMPASS Auditor and Assistant Secretary respectively, who both referenced the several nefarious activities of some police officers against motorists in Igando and Ogba area of Lagos.

In his response, Adejobi stated that the Lagos Police Command have lined up some plans to fish out bad eggs among the force. He noted that there are several other police formations in Lagos under other seven CP aside of the state command.

He also urged the general public not to give bribe to any officer, except if such officer is ready to issue a receipt to that effect.