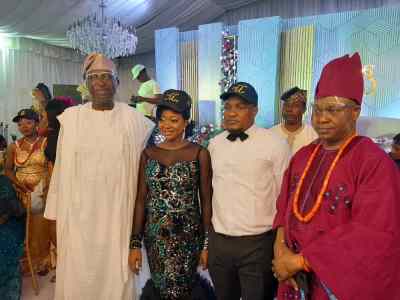 The Commisioner of Police, Lagos State, CP Hakeem Odumosu, has expressed and reaffirmed his zero tolerance for gender and/or domestic violence, which has occasioned many family problems, social dislocations and deviant behaviours that are, in turn, detrimental to national development in the country.

The operational guru, expressed his displeasure for this societal menace while advising the newly wedded couple at the wedding ceremony of the daughter to CP Shina Olukolu, the Commissioner of Police, Anti Fraud Unit, Force CID, Alagbon, at the Royal Oaks Event Centre, Ikate Area, Lekki, Lagos State on Saturday. He however vowed to partner with relevant government and Non-Governmental bodies to ostracize anyone caught in the devilish act in Lagos State.

CP Odumosu also charged the couple to uphold the sanctity of marriage and live a worthy life devoid of violence and dysfunctional conflicts.

He seized the opportunity to congratulate the parents of the couple for the successful ceremony; and commended the senior officers and men of the Nigeria Police, who were deployed for various assignments at the event, for their commitment and