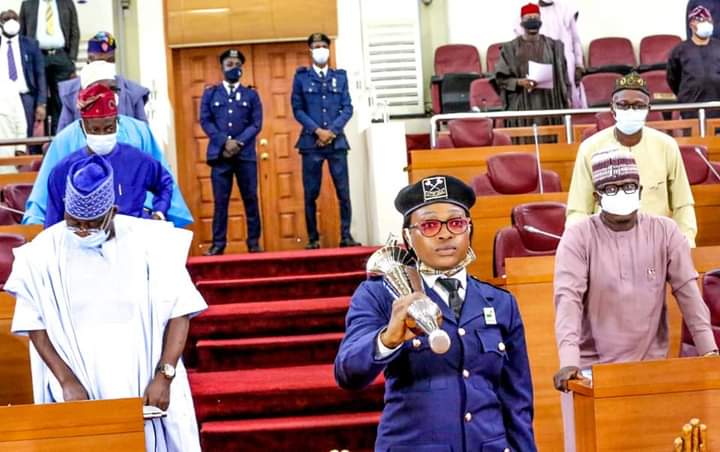 Mrs. Oyindamola Olorogun made history yesterday, Monday, September 28, 2020, as the first female Sergeant-at-Arms to carry The Mace ( Symbol of Authority) in the 41 years history of Lagos House of Assembly.

She was the cynosure of all eyes at the plenary session of yesterday when her sonorous voice reverberated through the Chambers as she shouted “Order! Mr. Speaker”.

Not a few members including, visiting members from Bornu State House of Assembly, were taken aback when she led Mr. Speaker, Rt. Hon. (Dr.) Mudashiru Ajayi Obasa into the Chambers for the day’s proceedings.

Mrs. Oyindamola Olorogun is one of the female members of the Sergent-at-Arms Corps of Lagos House of Assembly.

The 33 years old mother of two is an HND graduate of Moshood Abiola Polytechnic, Abeokuta. She joined the Lagos House of Assembly Service Commission in 2019.