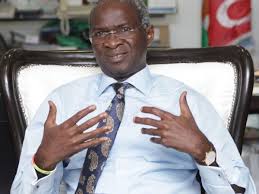 Former Nigeria President, Olusegun Obasanjo has been blamed by the Minister of Works and Housing, Babatunde Fashola, for being partly responsible for the weak infrastructural base in the country.

The former Governor of Lagos State while speaking on Channels TV noted that the former President should have invested in capital projects across the country, instead of paying off external debts.

Fashola further stated that if he had the $12 billion like the Olusegun Obasanjo government in 2005, he would have built rails and more roads.The minister added that Obasanjo should have deployed $18 billion for the development of Nigeria rather than pay off what Nigeria owed the cartel after months of negotiations.

He noted that the decision of the former President has seen the present government go into borrowing.

“At one time in this country, in 2005, we had $12 billion. At that time, these roads were bad. At that time there was no rail. But what did we do as a matter of state policy, it was just to pay creditors to our own detriment.”

“I can only imagine if I had the opportunity then with $12 billion in my hand, we would have built rails and roads. What this government is dealing with, which I am responsible for, is the infrastructure that will be enduring,” Fashola said