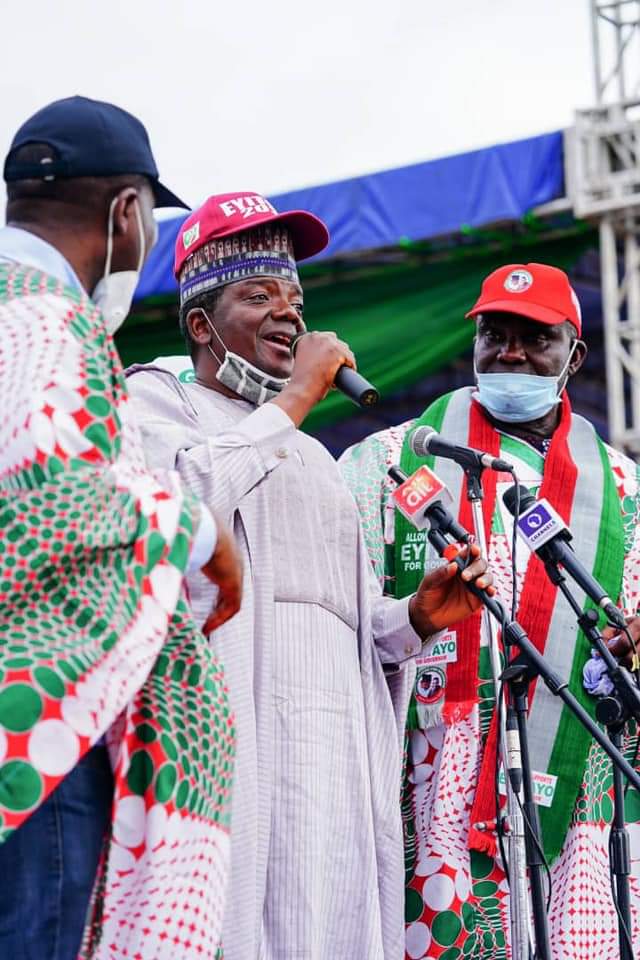 His Excellency, Zamfara State Executive Governor (Dr. )Bello Mohammed MON (Matawallen Maradun) is among the People’s Democratic Party (PDP) Governors that attended the Grand-Finale rally of the party in Akure, the capital of Ondo state towards the forthcoming governorship elections in the State on Saturday 10 October, 2020.

Addressing the party supporters at the event, Matawalle said he was overwhelmed with the crowd he saw and expressed the belief that the PDP candidate, Barister Eyitayo Jegede (SAN), will emerge winner of the election.

He also called on Ondo people to come out enmass and vote for the party candidate on the election day, assuring that all votes cast will be counted as was recently done in Edo State which gave victory to the PDP.

He also called on the party supporters in the state to avoid any act of violence that will cause confusion during and after the election noting that a level playing ground will be provided to all political parties by both INEC and Security agencies.

Matawalle who described the PDP flag bearer, Mr. Eyitayo Jegede, as an honest and sincere politician whose leadership qualities are acknowledged nationally charged people of the state to vote wisely by casting their votes in favour of the PDP and its candidate.

He stressed that when elected as Governor of Ondo State, alot of positive transformation will take place especially in Economic, Social and Environmental sectors for the benefit of the state.

The Governor was accompanied by the Commissioner of Special Duties, Honourable Muhammad Maiturare Sadiq and the Permanent Secretary office of the Executive Governor, Alhaji Abubakar Jaafar Maradun among others.