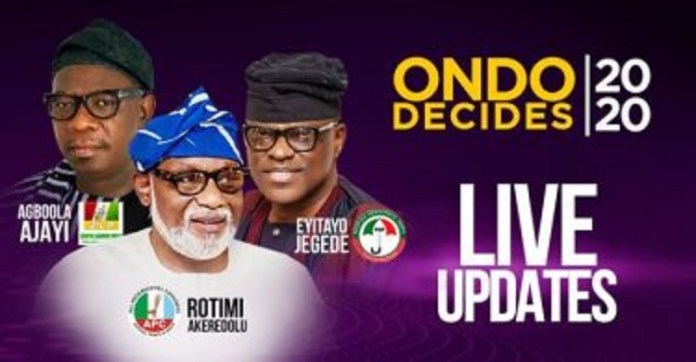 The first result of the ongoing Ondo governorship election in Ondo State, Western Nigeria, has emerged.

The Editor Nigeria reports that the Independent National Electoral Commission (INEC) commenced the Ondo governorship election at exactly 8 am on Saturday, October 10, amidst tight security.

The election is taking place in eighteen (18) Local Government Areas (LGAs), two hundred and three (203) wards and 3,009 polling units in the state.

The analysis of Permanent Voter Cards (PVC) collection across the councils shows voters’ enthusiasm. The 1,478, 460 cards collected represent 81 per cent of the 1,822, 346 total voter population.

There are 343, 886 uncollected PVCs, representing 19.9 per cent of the total registered voters.

Akure South, which comprises of Akure city, has the highest number of PVC collection put at 207, 238. The lowest is Akoko Southeast, which has 32, 763.

Below is the First Ondo Election Result…