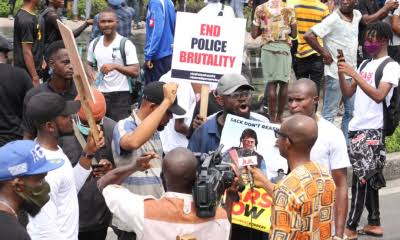 Nigerian protesters have rejected the newly set up Special Weapons and Tactics (SWAT) Team by the Inspector General of the Police, Mohammed Adamu on Tuesday.

The protesters who have walked major cities across the country, calling for an end to police brutality, harassments, killings, and extortions say the newly formed SWAT is no different from the now-defunct Special Anti-Robbery Squad (SARS).

Taking to social media, the protesters who have blocked off major roads especially in the commercial city of Lagos say they want a wholesale reform of the Nigerian Police Force.

A Twitter user, Joel urged the youths to stand firm against SWAT. “If we stand in unity to fight against our common enemy, there is no limit to what we can achieve. Let us take away ethnicity, let us take away religious belief, let us all come out as one. We are unbreakable, we are unstoppable and we shall achieve #EndSWAT,” he wrote.

Ajibola reckons that the move of the IGP was designed to end the protest but not end the brutality. “Same people, different name. We don’t want SWAT. #EndSWAT now,” he tweeted.

Demagogue Ph.D. said the demands of the protesters are clear. “We are clear with our demand. Disband SARS and never allow them back into the force. SWAT is a good idea, but it turns sour when you know that the recruits are the same murderous men of now-disbanded SARS. We have sane able-bodied men who can do the job. For this I join #EndSWAT,” he said.

Boaz Abigail urged Nigerian leaders to be more accountable to the citizens. “Enough of the police brutality and bad governance. We are all we have and should be allowed the right to defend what we stand for. Is it too much to ask that our leaders be responsible and accountable to the people whose taxes pay their salaries? Woman shrugging #EndSWAT,” she said.

The protesters have vowed to continue on Wednesday as they seek more reforms within the Nigeria Police Force.

On Tuesday, the IG of Police had in a statement signed by Frank Mba, the police spokesperson noted that the SWAT team will fill the gaps arising from the dissolution of the defunct SARS.

He said, “Prospective members of this new team will also undergo a psychological and medical examination to ascertain their fitness and eligibility for the new assignment.

“They are to commence training at the different Police tactical training institutions nationwide, next week.

“While reaffirming his irrevocable commitment towards the successful and holistic implementation of the Police reforms, the IGP enjoins members of the public, particularly protesting citizens to exercise restraint and allow measures being put in place to come to fruition and engender a Police Force that would meet the yearnings and aspirations of the citizenry,” the statement said.