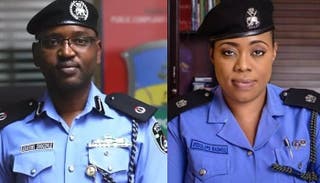 The Police Service Commission has dismissed reports that Assistant Commissioner of Police Abayomi Shogunle and Chief Superintendent of Police Dolapo Badmos have been dismissed or demoted for misconduct.

It asked the public to disregard a list which went viral, indicating that the two officers were among 37 others purportedly sacked by the police.

Shogunle is a former head of the Police Public Complaint Response Unit, while Badmos is a former spokesperson for the Lagos State Police Command and later the Zone II Command.

A list purportedly submitted by the Presidential Panel on Police Reforms was Saturday afternoon posted online, listing names and service numbers of 37 officers alleged to have been recommended for dismissal, demotion, or warning.

But the PSC spokesman, Ikechukwu Ani, said there was no iota of truth to the viral report.

He confirmed to Sunday PUNCH on Saturday that Shogunle was reprimanded for misconduct but noted that he was not demoted or dismissed as speculated.

Ani stated, “Dolapo Badmus was not dismissed. She had two cases. In the first case, she was awarded the punishment of a reprimand, while in the second case, she was given a severe reprimand. Shogunle was also awarded a reprimand.

“Tochukwu Ogalagu was given the punishment of a reprimand. That was part of the decisions of the 9th plenary meeting of the Police Service Commission. The names of the dismissed officers were published.”

The commission’s spokesman further explained that ACP Akin Fakorede, a former Commander of the defunct Special Anti-Robbery Squad in Rivers State, was equally given a severe reprimand by the PSC.