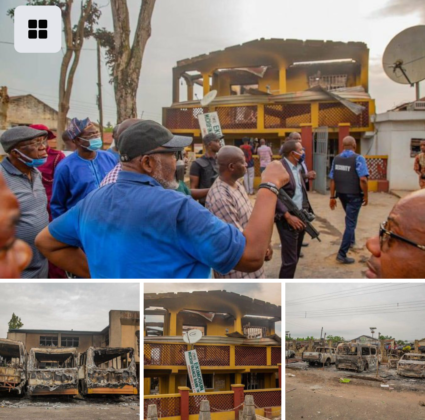 Ondo State Governor, Arakunrin Oluwarotimi Akeredolu SAN, on Saturday, visited Okitipupa, Ore and Ondo town for an on-the-spot assessment of the public and private assets vandalized by hoodlums during the #ENDSARS protest in the state.

Governor Akeredolu alongside Heads of Security Agencies in the State visited the Nigeria Correctional Service in Okitipupa where inmates were set free by hoodlums after vandalizing the facility.

Other facilities visited by the Governor included; Okitipupa Local Government Secretariat, INEC office, Nigeria Police Divisional Office, Police Area Command, Board of Internal Revenue office, the Okitipupa Court complex, Nigeria Police Station at Ode-Aye and the residence of Engr. Ife Oyedele which was equally vandalized and looted by the hoodlums.

In Ore, the headquarters of Odigbo local government area, Governor Akeredolu also visited the Court complex which was razed by hoodlums.

In Ondo town, the Governor assessed the micro-finance bank building adjacent the Osemawe palace which was also set ablaze.

The palace of Osemawe of Ondo Kingdom, Oba Victor Kiladejo was also attacked with the gate house partly burnt and the window of the hall within the Palace vandalized.

Other facilities visited in Ondo town include; FCMB bank, Police Station and some vehicles burnt in the town.

Governor Akeredolu and his team also visited the Akeredolu/Aiyedatiwa campaign office in Akure, the state capital which was razed down by arsonists during the #ENDSARS protests.