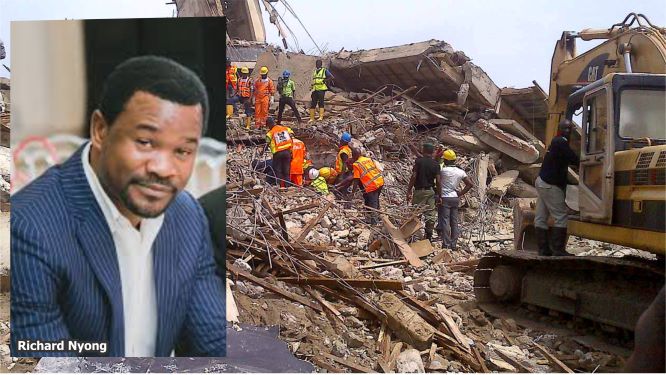 An attempt by the managing director of Lekki Gardens Estate Ltd, Richard Nyong to quell criminal charges against him and others by the Lagos State government has failed.

The state government had sued the company over the collapse of a five-storey building under its construction on Kushenla Road in the Ikate Elegushi area of the state which killed no fewer than 35 persons on March 8, 2016.

After the building collapsed on March 8, 2016, Lekki Gardens Estate reported that five people died in the incident as against the official figure of 34 casualties.

The state government had also argued that the collapsed building had been sealed by the Lagos State Building Control Agency and served contravention notice for exceeding the approved floors, but Messrs Lekki Worldwide Estate, the promoters of Lekki Gardens, continued construction.

“In a brazen act of defiance and impunity, the owners of the building, Messrs Lekki Worldwide Estate Limited, the promoters of Lekki Gardens, criminally unsealed the property and continued building beyond the approved floors until the unfortunate incident which has led to loss of lives,” it said.

The prosecutor who is the attorney-general of Lagos State, had told the court that the defendants committed the offences between August 2014 and March 8, 2016 at House H15, Horizon 1, Extension, Ikate in Elegushi, Lekki.

The prosecutor said that the defendants commenced and finished building a six-storey complex without building permits and other building approvals.

“The defendants constructed the building with gross negligence and disregard to human life which led to the death of five people.

Maruis Agwu, prosecution witness, an architect, while testifying before Justice Sybil Nwaka of the Ikeja Division of the Lagos State High Court, said that the initial plan of the building was for a three-storey building, but that Nyong later told him of his intention to increase the building to five floors because of the high demand of subscribers.

According to Agwu, when he discovered the defect on the collapsed building which was brought to their notice by one Madam Omolabake Mortunde, he drew the Lekki Gardens managing director’s attention to it and he said he was going to do something about it but he never did.

At the continuation of trial recently, Justice Nwaka, in charge of the case, rejected an out-of-court settlement between the state government and Lekki Gardens Estate.

Justice Nwaka rejected the “Plea and Sentence Agreement” between the state and the company because it was drawn up in the absence of families of those who died in the incident.

The judge queried the two parties for not specifying the names of family members who would receive the N10 million compensation for the five persons whom the company insisted were the only casualties of the building collapse.

Mrs Nwaka also faulted the amended charge arising from the out-of-court settlement for leaving out the criminal aspects of the original charges preferred by the state government against the property development company.

After hearing from the defence and prosecution counsel at the continuation of trial, Mrs Nwaka berated the lawyers for tendering a ‘Plea and Sentence Agreement’ and an ‘amended charge’ before the court without observing due diligence.

“The new charge is not before the court as far as I am concerned, we are still on the entire charge,” she said.

Babajide Taiwo, the prosecution counsel, told the court that within the period and the last adjournment, all the parties involved had “bargained on an agreement on January 23, 2020.

“All the parties signed the amended charge and the plea and sentence agreement,” he said.

Bode Olanipekun, the defence counsel who represented Mr Nyong and the sixth and seventh defendants, said the parties explored the possibility of a resolution without going into a full-court trial, which led to a plea and sentence agreement and an amended charge.

He said the parties had found a common ground for the compensation of the families of the deceased as well as the state government.

The counsel prayed the judge to enter the agreement as the judgement of the court.

The judge, Mrs Nwaka, who initially requested time to go through the agreement, became furious after seeing that the amended charge left out some cogent parts of the criminal charges against the defendants.

“Many lives were lost, breadwinners of many families,” she said furiously.

In defence, Mr Olanipekun said there were frank engagements on both sides before an agreement was reached.

“My Lord, there were responsible deliberations which led to the agreement,” he said.

He added that at the stage the agreement was reached, the prosecution took cognisance of the absence of certificates of deaths and post-mortem results of the deceased.

Mrs Nwaka, while reviewing the agreement, said it was the first time it was presented to the court and she could not give any verdict without thoroughly going through them.

“Are you saying you are paying more to the state government than the deceased families? Five families will get N50 million while the state will get N100 million?” the judge asked.

Mr Olanipekun further clarified that the families of people involved in the accident received intervention in the form of monetary support paid by the defendants.

“If there were supports, they should be in the copy of this agreement, you need to bring more facts to assist the court,” Mrs Nwaka said.

After asking the counsel if the families of the deceased who are to receive the compensation were present when the agreement was signed, the court realised that the families were neither present nor were their names listed in the agreement.

“It is the state government that will administer the disbursement. We have no direct contact with the families of the deceased,” Mr Olanipekun said in defence.

“You cannot just give money in a vacuum, and you expect me to agree to this agreement? It is easy to put names. It is not just to put the names of the deceased, who are you giving the N10 million to? Who are the dependants or persons to receive the money? They should be identified,” the judge said.

Mr Taiwo, the prosecution counsel, told the court that the families and all parties were duly notified. “It is one thing to notify them, it is another thing for them to be present in court.”

The judge said she had not requested their presence in court but added that it was not acceptable for the names of the families or those that will receive the N10 million not to be mentioned.

“They could give the money to people who are not related to the deceased. I know government, yes, they are going to get the N100 million, but I must identify the families,” the judge said.

“And you want me to agree to this? I refuse, I am not satisfied, I thereby refuse the agreement,” Mrs Nwaka said.

Mrs Nwaka ordered that the counsel get the names of the family members that will receive the compensation and they must also present them in court.

“Go and do your work learned souls. This is not a wishy-washy thing; lives are involved. Trace their families and bring them to court,” she ordered.