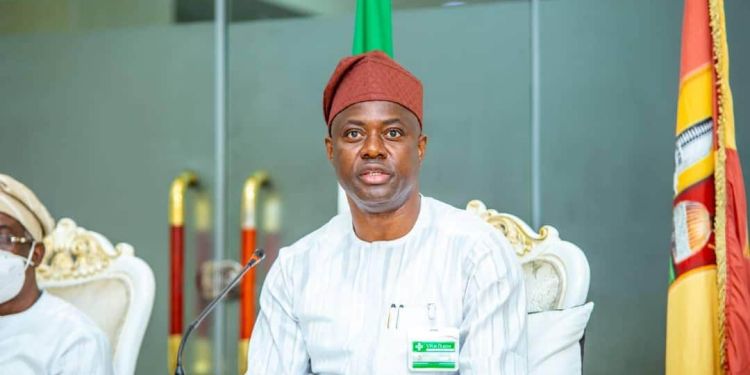 The Government of Oyo State has approved the purchase of 106 brand new buses for the mass transit scheme in the state, while also approving the construction of two link roads around Akobo and junction improvement contracts in the Challenge area of Ibadan.

The Oyo State Commissioner for Information, Dr. Wasiu Olatubosun; his Budget and Planning counterpart, Barrister Adeniyi Farinto; and the Commissioner for Youth and Sports, Seun Fakorede, who addressed newsmen on the outcome of the state’s Executive Council meeting, said that the approval was in line with the government’s drive to transform the transport sector and improve the state’s economy through same.

Fakorede, in his submission at the press conference on Wednesday, said that the 29th State Executive Council meeting, approved the purchase of the buses at the cost of N9.3 Billion.
A statement by Mr. Taiwo Adisa, Chief Press Secretary to Governor Seyi Makinde, indicated that the approval for the purchase of the buses was one of the resolutions reached at the meeting.

According to him, the operations of the Bus Rapid Transit (BRT) scheme as a major means of public transportation has been accepted in some Nigerian cities over the years, stating that the Pacesetter Transit Scheme is a good example of the BRT system existing in Oyo State.
He said: “I wish now to state that the effort and the commitment of the present administration under the visionary leadership of His Excellency, Engineer Oluseyi Makinde, are revamping the agriculture sector in the state. So, it is imperative that the state provides adequate and effective means of transportation, of moving persons, goods, and services, which will have a multiplier effect on commerce and economic development of the state.”

He added: “A company, by the name Petrobridge Nigeria LTD, has been identified as having the capacity and the capability to immediately supply 106 unit of buses to complement the transportation-related activities in Oyo State. And, to this end, it is worthy to note that there is an urgent need to purchase 106 units of brand-new buses to complement the fleet at the PTS and also to improve the mass-transit system in the state and, by extension, boost the economy of the state.

“Therefore, the council considered and approved the supply of 106 unit of brand-new buses at a total cost of N9,395,427,659.5 only, all taxes inclusive.”
Similarly, the state’s Commissioner for Information, Culture and Tourism, Dr. Wasiu Olatubosun, also stated that the Council considered and approved the contract for the execution of the junction improvement works at Challenge Roundabout and Felele/Idi-Odo Junction to Messrs Planet Project Limited at the cost of N2,538,856,913.36.

He said that the project would ensure the installation of an intelligent transportation system, which, he said, includes intelligent traffic signals, traffic signal installation, traffic signs, anti-finger metal security fence and other infrastructural systems with control room and coordination traffic signal devices.
According to him, the system would serve as a major catalyst for traffic solutions at the Challenge, Felele/Idi-Odo junctions.
The Commissioner for Budget and Economic Planning, Barrister Adeniyi Farinto, in his contribution, said that the Council granted approval for the rehabilitation and construction of two link roads at Akobo area of Ibadan at the cost of N69 million.

He said that the project would be executed through Direct Labour by the Oyo State Transport and Road Management Agency (OYSTROMA) and that it is expected to be completed within two months.
According to Farinto, the two link roads include the one linking the Ojoo Expressway, beside the General Gas-Akobo Bridge, while the second link road is the one beside the NNPC Mega station, saying the importance of the project is to bring relief to road users constantly facing traffic gridlock along the Akobo-Ojurin Federal Road.

He said: “The contract is to be executed through the direct labour efforts of OYSTROMA, and it is to cost N69,170,431.72. The execution of the contract will commence soon and it is expected to be completed within two months