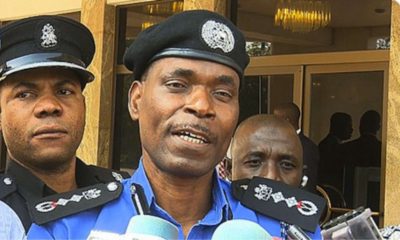 The Inspector-General of Police, Mohammed Adamu has given all personnel of the force a go-ahead to attack back on any confrontation in the course of discharging their official duty.

According to him, the police personnel also have the right to defend themselves in case of physical danger.

The IG had earlier asked the force men to withdraw from the streets following the killing of over 20 policemen in the violence that erupted as a result of the EndSARS protest across the country.

According to the IGP, while speaking a few moments ago, the #EndSARS protest was staged to demoralise the force, adding that the Nigerian government and Police Force would soon roll out packages for the families of the deceased officers.

“The unity of this country lies in the support that is given to police officers because if you are demoralized, the tendency is for criminals to take over the public space and the country is relying on us to make sure that the public space is not taken over by the criminals. So no amount of provocation, no amount of insult would make us to shy away from our responsibility,” said Adamu.

“When we talk of human rights, the police are human; so, the rights of police officers would also be protected. So, we are sending the message that legally, we have the right to protect ourselves but while we are doing that, we make sure that until we are endangered.”