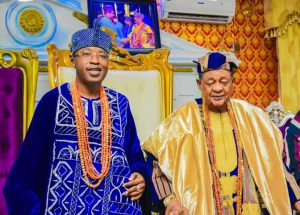 The Alaafin of Oyo, Oba Lamidi Adeyemi 111, has said that the Ataoja of Osogbo, Akinrun of Ikirun and Olokuku of Okuku used to be District Chiefs (Baale) some years ago.

Our reporter gathered that the monarch made the revelation during a visit to the See what Alaafin says about Ataoja, Akinrun, Olokuku as Baales of the Oluwo of Iwo, Oba Abdulrosheed Adewale Akanbi, explaining that the Oluwo has never been a District Chief (Baale).

“Oluwo is not Iwo’s District Chief (Baale), there was no Nigeria here before, it used to be the Northern protectorate, Southern Protectorate and the protectorate of Lagos before the amalgamation in 1914 during the reign of my father.

“Alaafin was the only Oba that went to sign for the amalgamation in 1914.

“Ataoja was given crown in 1948 during the reign of my father and that was when he moved from being a Baale to becoming an Oba. At least, we have Ita Baale in Osogbo till date.

“It is not because I’m seated here with him, when a young man becomes a king, don’t call him a young man.” The Alaafin stated.

Also, the monarch implored kingmakers across Yoruba land not to appoint old men as kings, because of the huge job of the status.

“If you make an old man a king, you’ll miss a lot. We’ll keep appealing to Yorubas not to select old men as kings because they wouldn’t have the capability.

“Oluwo has transformed this palace because I’m used to coming here and I commend the good works done here so far.” He added.

On the rumoured feud between Yoruba Obas, the Alaafin traced it to the decision of the leadership of the Old Oyo State under the late Chief Bola Ige to appoint the then Ooni of Ife Oba Okunade Sijuwade, as the Chairman, Council of Chiefs after the demise of the late Sir Adesoji Aderemi.

“When the Late Aderemi, Ooni of Ife joined his ancestors, the first person to move the motion that the Alaafin should be the Chairman of the Western State Council of Obas and Chiefs was Oluwo Abimbola and it was supported by all Obas present.

“But the government decided to go otherwise and that was the beginning of the disunity between Yoruba Obas.

“The Deputy Governor, acting on the directives of the Governor, S.M. Afolabi, issued a release that the Ooni of Ife is automatically the Chairman of the Council of Obas because he is the foremost monarch in Yoruba land.

“All the kings disagreed. When did constitutional government came compared to the long reign of the Yoruba traditional system.

“There is a book written by a foreign author which I sent to the then Oyo State, the book states that Oranyan is a direct descendant of Oduduwa and he is reputed to be the head of the princes in Yoruba land.

“Bola Ige then called me, saying he doesn’t want to quarrel with the Alaafin because such could distabilize their government. He said government doesn’t reverse official decisions but I’ll still be accorded necessary respect particularly to represent the state in Lagos during meetings of the Council of Chiefs.” Alaafin explained.

Among others, the Alaafin said the right thing was to make Iwo the capital of Osun State but the government chose to act otherwise.

Earlier in his welcome address, the Oluwo of Iwo urged Alaafin to bring the entire Yoruba Obas together to form the Yoruba Council of Obas, noting that the Alaafin remains father of all Yoruba Obas.

“Don’t let us be scattered like this, state creation came recently. You are the Alaafin of Yoruba land and I want you to bring us together because there can never be unity across the land if we kings are not united. I am not cursing.

“Our father Alaafin; Iku Baba Yeye, there must be Yoruba Council of Obas. Today is not for talks because of where we are going but this is what I want request from you before the whole world.

“You are our father in Yoruba land, there are many things we should have done since but some elements whom I wouldn’t wanna call enemies because I don’t keep enemies. I see people in such category as my promoters because the more they talk about me, the popular I become. Even US President now knows Oluwo.” Oluwo said.