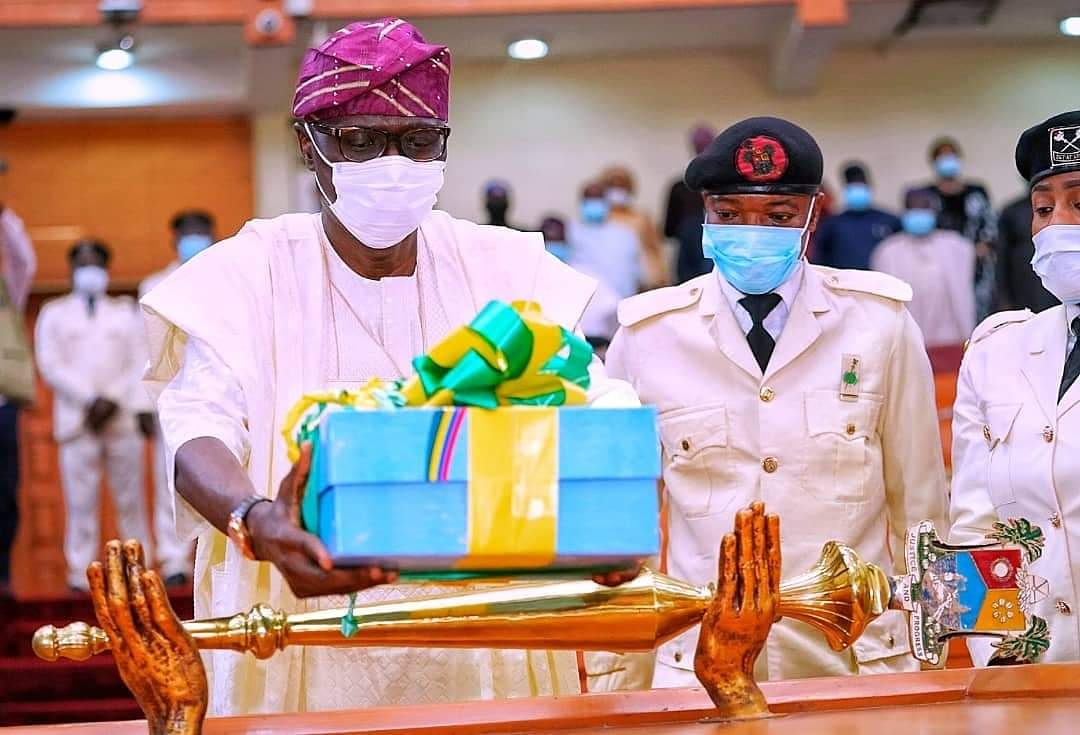 Lagos State is set to stop the payment of pensions to former governors and their deputies.

It is all to keep the cost of governance low, Governor Babajide Sanwo-Olu said today at the House of Assembly where he unveiled a 2021 budget proposal of N1,155 trillion. He drew applause as he broke the news.

In the “Budget of Rekindling Hope” the government will be investing heavily in the development of human capital, with special focus on youth employment and provision of social safety for young people. The focus will be raising human capital, creating jobs and strengthening security for businesses to flourish.

The expenditure is for the restoration of economic balance as the State continues to navigate its way out of the negative impact of the Coronavirus (COVID-19) pandemic and the destruction of public assets, following the EndSARS protest hijack.

The budget, the Governor said, will be funded from a projected Internally-Generated Revenue (IGR) of N962 billion. The N192.495 billion deficit will be financed through bond issuance, internal and external loans.

Sanwo-Olu said the budget was designed to improve the state’s economic conditions and create the social safety needed for the youth and all hardworking residents to flourish. He said the Government would leverage its developmental efforts and focus on sectors with job-creating potential, such as agriculture, construction, technology and security.

He said: “The year 2021 is one of Rekindled Hope, in accordance with recent events of global and national proportions, especially the coronavirus pandemic, the EndSARS protests, the general feeling of disenchantment in the polity and the socio-economic yearnings of Lagosians for good governance. This budget reflects our desire to rebuild the trust of the people in this Government, even as we commit significant human and financial resources to the rebuilding of Lagos while doing all we can to move on from the destruction and vandalism recently witnessed in the State, barely three weeks ago.

“The COVID-19 pandemic and EndSARS protests have only heightened the need to urgently implement various programmes under the T.H.E.M.E.S. agenda. The 2021 budget will, among other things, provide for youth employment, security, and youth engagement and social works. We are set to improve the economic conditions and social safety needed for our youth to flourish. We are committing resources to sectors that need to grow for our people to become self-reliant and economically empowered. In Agricultural sector, our food security plan has a cumulative budget of N22.21billion while we are committing a cumulative budget of N311.43billion to provide infrastructure.”

Sanwo-Olu disclosed his administration’s move to keep the cost of governance low in the face of dwindling revenues and general inflation occasioned by multiple factors, announcing the repeal of the State’s Payment of Pension Law of 2007, which provides payment of pension and entitlements to former Governors and their deputies.

The Governor said he would be sending an Executive Bill to the Assembly for the repeal of the Pension Law, noting that public service would now be predicated on selflessness in the State.

He said: “In light of keeping the costs of governance low, we will be sending a draft executive bill to the House of Assembly imminently for the repeal of the Payment of Pension Law 2007(Public Office Holder), which provides for payment of pension and other entitlements to former Governors and their Deputies. It is our firm belief that with dwindling revenues and inflationary growth rates, that we need to come up with innovative ways of keeping the costs of governance at a minimum, while engendering a spirit of selflessness in public service.”

Sanwo-Olu disclosed that the proposed budget would support entrepreneurship and expand the opportunity of Micro, Small and Medium Enterprises (MSMEs) to facilitate socio-economic advancement. He pledged that his administration would continue to support entrepreneurs in the State through the Lagos State Employment Trust Fund (LSETF). Besides, it will also strengthen technical and financial support for beneficiaries to generate employment that will stimulate economic prosperity.

The Governor said there would be increment in its financial commitment to youth mentoring, mental health support, and substance abuse rehabilitation. This project, he said, would be driven through the Office of the Civic Engagement, and Ministry of Youth and Social Development.

He said: “As we work on reviving the growth of our economy, we must commit resources to our state-wide security architecture, especially in the areas of intelligence gathering and the motivation of all security personnel in the Neighbourhood Watch.

“We will be increasing the size of the Neighbourhood Watch personnel across the State and ensure their training, including community engagement, de-escalation techniques, and proactive information gathering within communities. We believe that as the population of Lagos State increases and becomes more sophisticated, so should the training of our security personnel to cope with emerging challenges.”

Despite the slowdown of activities occasioned by the COVID-19 pandemic, Sanwo-Olu said this year’s budget had performed at 77 per cent. A performance benchmark of 86 per cent was projected by the end of last quarter.

Lagos, the Governor said, trained 9,000 teachers in modern teaching techniques to boost learning outcomes and provided complementary textbooks and other ancillary teaching aids for over 350,000 students.

Sanwo-Olu said the State Government spent N25 billion for the construction, refurbishment and equipping of our Healthcare centres across the State, in line with its health programmes. He added that the State built and rehabilitated 589 classrooms while also providing 1,568-bed hostels in secondary and primary schools.

“We have audacious governance goals, which we cannot achieve without the concerted efforts of all our people. We should not allow the events of the past few months to obliterate our consistent cycles of socio-economic progress. Let us begin to rebuild our State with determination and optimism, even as we advance the interests of the electorate and restore their confidence in this Government,” the Governor said.

The audience of lawmakers, party chiefs, Executive Council members and other guests clapped as Sanwo-Olu spoke.

The Speaker, Rt. Hon. Mudashiru Obasa, praised the Governor’s courage in the face of the recent challenges that faced the State, pledging the readiness of the legislature to work with the executive arm to rebuild the State.

He promised speedy passage of the budget, assuring the public that the Assembly would properly vet the details in line with its mandate.

He said: “We have all listened with attention how the wealth of the State will be utilised for our common good in Year 2021. The responsibility is now on the members of the Assembly to meticulously perform their constitutional duty. I reiterate our commitment as responsive assembly in working together with the Executive to bring succour to all individuals affected in the aftermath of the EndSARS protests.”