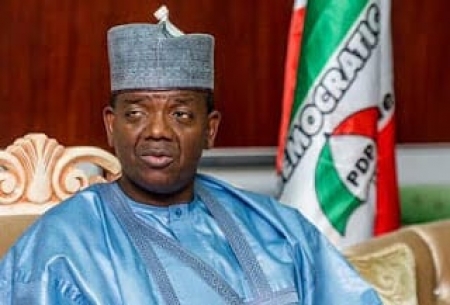 The Ministry of Mines and Steel Development, Thursday, debunked claims over the alleged sale of gold by the Governor of Zamfara State, Bello Matawalle, to the Central Bank of Nigeria, CBN.
This was contained in a statement signed by the Head of Press and Public Relations, Ministry of Mines and Steel Development, Etore Thomas, and made available to Vanguard, with the subject, ‘Zamfara Gold: Putting the Facts Right’.
According to the statement, people are seemingly portraying that some states in the country have right to aggregate minerals resources within their domain for their use, which is not true as all mineral resources remain on the Exclusive Legislative list as enshrined in the 1999 Constitution (as amended).
The statement also pointed that for the benefit of doubt, Section 44(3) states “the entire property in and control of all minerals, mineral oils and natural gas in, under or upon any land in Nigeria or in, under or upon the territorial waters and the Exclusive Economic Zone of Nigeria, shall vest in the Government of the Federation and shall be managed in such manner as may be prescribed by the National Assembly.” Likewise the Mineral Act of 2007 is very clear on issue of minerals ownership and exploitation.
According to the statement, it is in line with this that the Ministry of Mines and Steel Development is saddled with the responsibility for identifying the nation’s solid minerals, advising the government on the formulation and execution of laws and regulations guiding the various stages of prospecting, quarrying, and mining, and handling sale and consumption of solid minerals in the country, through the issuance of permits, licenses, leases and collection of rents, fees, and royalties.
The statement reads in part, “The attention of the Ministry of Mines and Steel Development has been drawn to media reports on reactions of individuals and groups to the purported news report about Zamfara State Governor buying gold from artisanal miners in the state and selling same to the Central Bank of Nigeria (CBN). Ordinarily, the Ministry would have been silent but for the negative impression those views are portraying; seemingly that states in some parts of the country have right to aggregate minerals resources within their domain to their use.
“On Zamfara State gold; Zamfara State has security challenges and the State government discovered that bandits were exploiting the ignorance of the artisanal miners, buy off their gold at very cheap price, take the gold across the border and sell at market price and  exchange for ammunitions and guns, which was fueling banditry.
“Zamfara State government through a registered company, with a buying centre license is now buying gold from the artisanal miners at market price. This has no doubt discouraged the artisanal miners in the state from selling to bandits.
“Though states through their licensed corporate bodies can buy and sell gold to any interested persons or company, it is worthy of note that CBN did not and will not buy gold from Zamfara Government.
“The gold displayed by the Zamfara State government is called dore bars (semi-processed gold). CBN buys gold that is processed to 99.99% purity which is LBMA standard, tradable all over the world.
“The Federal Government encourages state governments to be part of the exploitation of minerals in the country by incorporating a limited liability company with which to approach the Ministry for a license for Mining or Buying Centres.
“Such corporate body/company must go through normal processes for approval and issuance of license. This license allows such company to exploit minerals in any given location which is called Cadastre Unit.”
The statement also explained that “As part of strategies to implement policies/programmes in the Mining Sector to broaden revenue generation and employment opportunities in line with the economic diversification agenda of this administration, the Presidential Artisanal Gold Mining Development Initiative (PAGMI) is being implemented. The components of the initiative included but not limited to Formalization of the artisanal miners into cooperatives This is to integrate their activities into the economic and institutional framework that would eliminate illegality; Registration of Buying Centres and Aggregators, to provide market access for artisanal miners, etc.
“Like in the oil and gas sector, revenues generated from mineral resources are paid into the federation account, and shared among the states during the monthly meeting of Federation Allocation Account Committee (FAAC). 13% derivation is paid on mineral resources exploitation from minerals producing states as done in the oil and gas sector