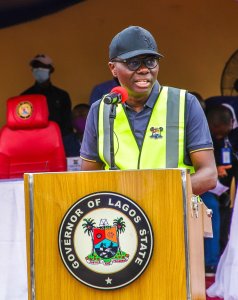 The Lekki/Epe expressway has been a death trap and a haven for criminals because of its deplorable condition. Constructed 40 years ago and referred to as the new Lagos, it has not lived up to its name. Observers say with the planned reconstruction of the strategic road, the economy of Lagos will receive a boost.OKWY IROEGBU –CHIKEZIE reports that the economy of Lagos will receive the added impetus to be the fastest growing economy in Africa

LEKKI/ Epe highway has been a nightmare to many as a result of its poor condition and traffic snarl which  had led to loss of lives and property. Communities around the axis have decried its neglect over the years and continuously counted their losses. The axis hosts many high profile companies among them: the Lekki deep sea port, Free Trade zone , Alaro City, Dangote Refineries and many others.

At the unveiling of the project, Governor  Babajide Sanwo–Olu reiterated his administration’s commitment to deliver the road in good time.  He regretted the poor condition and neglect of the road for years since its construction and pledge to the successful delivery of the project in no distant time. He said the idea is to support the huge industrial Lagos at that axis from Eleko junction to T junction in Epe and to stimulate he huge economic and industrial growth of the state. He said he is committed to developing the whole state to meet up with the planned smart city and 21st Century Lagos. The road construction, he explained, will be in two phases with three carriage way of  18. 7 kilometer and 26.7 from Abraham Adesanya to Eleko junction with tranverse longitudinal  ducts, weigh bridges and a rail line corridor.

Earlier,  the  Special Adviser On Works and Infrastructure to the Governor,  Aramide Adeyoye, an engineer  at the flag off of the re-construction and upgrade of Lekki –Ibeju–Epe expressway, said its another effort of the  current  administration at improving the standard of living of Lagosians by investing in infrastructure  that  will support business and ultimately promote economic development.

She said it is part of the social contract of the Sanwo–Olu administration to  ensure even distribution of major infrastructure among the various divisions in order to achieve socio-economic development and target  the  redistribution of wealth for even development of the state.

Residents and road users along this axis have clamoured for a solution to the suffocating nature of the traffic gridlock along the Lekki-Epe Expressway especially at the Ajah Junction. This project will help resolve the gridlock at Ajah/Ado-Badore Roundabout and environs while ensuring the Lagos bound traffic is effectively channeled.

No doubt, the Lekki-Epe Expressway is a laudable project which when completed will impact positively on the lives of residents, eliminate traffic gridlocks, reduce drastically the travel time of commuters, businessmen and women and improve the socio-economic activities around the axis”.

Aramide declared that the state  today is a giant construction site, with so many projects going on simultaneously.  She recalled the re-instatement of existing road infrastructure at the Victoria Island-Lekki Circulation Project conceived in partnership with Access Bank Plc, under the Public Infrastructure Improvement Partnership, PIIP initiative.

According to her, other roads commissioned on the axis include  Jide Oki Street, Moshood Olugbani, Ade Odedina and several other improved junctions.

She called on all stakeholders to be wary of vandals by carefully watching and guiding the project.

Oba Ogunfolarin Ogunsanwo said the road, if eventually delivered, will be of immense benefit to the people. He decried the high level of banditry, kidnapping and maiming on the axis. He said: “Not only are vehicles damaged and people are not able to move freely, it also affects the livelihood of so many people. Transporters that travel to the eastern part of the country and indeed other parts of the country are not finding it easy, local travelers don’t fare better. Losses are recorded daily in terms of human and material losses but with the planned upgrade and reconstruction of the axis, life will return and government herself will also reap from the huge development on the axis”.

While decrying the neglect of the axis in the last 40 years when the road was constructed, he pleaded with the government to see to the successful delivery of the project to make life meaningful for his people.

A community leader, Ganui Adegbile,  said the road has become a death trap to the people living on the axis . He said there is hardly a day that deaths are not recorded with articulated vehicles over turning their contents on the road because of the road.  He commended the governor for coming to their rescue and prayed the road will be completed in good time.

Chief Samba said they have suffered untold losses in terms of their farm produce that is not able to get to the markets and shops that need them. He said his community is an agrarian community and without the benefit of a good road they will continuously suffer losses which will eventually discourage them from going to the farms and feeding the large population of the state and beyond. He prayed the road will not be abandoned for any reason.