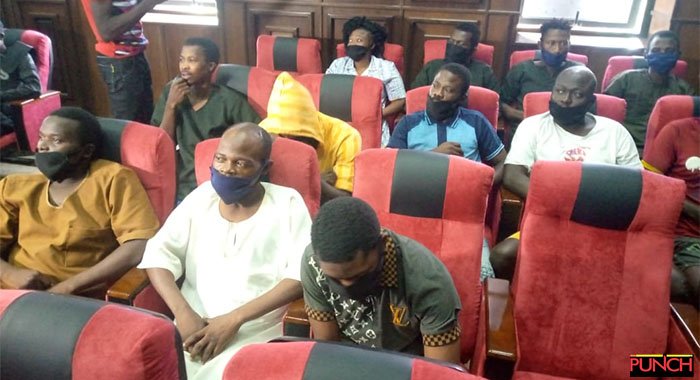 Perfecting the bail of 12 detained aides of Yoruba Nation agitator, Sunday Adeyemo, aka Sunday Igboho, has suffered a setback as the Federal High Court in Abuja demanded 24 sureties.

This development was in contrast to four sureties earlier demanded by the court, JomogNews Nigeria reports.

Pelumi Olajengbesi, who is a member of Igboho’s legal team, expressed dissatisfaction at the development. According to the lawyer, the legal team is only aware that the presiding judge, Justice Obiora Egwuatu, granted the detainees bail with four sureties.

Justice Egwuatu, last Wednesday, admitted the 12 applicants to bail after spending five weeks in the custody of the Department of State Services, following their arrest on July 1, 2021 at Igboho’s Ibadan residence raided by the DSS operatives around 1am.

The secret police had also said it killed two other associates of the activist in a gun duel and subsequently declared Igboho wanted for allegedly stockpiling arms to destabilise Nigeria under the pretext of Yoruba Nation. But the activist, who is now in a Beninese detention facility, had denied the allegation.

According to Olajengbesi, Justice Egwuatu granted bail to eight of the detained aides in the sum of N5m, two sureties resident in Abuja, with evidence of two years’ tax payment.

The lawyer said the bail terms for the remaining four were N10m in the like sum, two sureties resident in Abuja with one of them being a civil servant in a Federal Government ministry or any of its agencies with grade level not less than 12.
In addition, the four applicants will report to the DSS office every first Monday of the month effective from September.

The DSS lawyer, Idowu Awo, had told the court that he was not opposing the bail of eight of the applicants as their investigations revealed that the levels of their involvement in the offence of arms stockpiling and other criminal activities were minimal.

But the DSS lawyer argued that four others, Babatunde, Shittu, Oyetunji and Sunday, should not be granted bail in the interest of justice and national security.

Olajengbesi, however, prayed the court to discountenance the argument of the DSS as it was unknown to the Nigerian law. Justice Egwuatu disregarded Awo’s argument and granted the 12 detainees bail.

But speaking to Saturday PUNCH on Friday, Olajengbesi expressed surprise at the “clarification” of the court.

The lawyer said he was at the bail office of the court on Friday to start the vetting and assessment of the sureties when he was told that two sureties resident in Abuja were needed for each of the detainees.

He said, “Having got the four sureties and in the process of perfecting the bail conditions, the court clarified that the two sureties there were for each of the detainees, so the court is asking for 24 sureties.

“The bail office clarified from the judge today (Friday). The difference now is that two sureties resident in Abuja per person are needed.”

He appealed to the Yoruba to assist the detainees in meeting their bail conditions.

“When the court granted the bail, we wanted them to be remanded in a correctional centre here in Abuja because the complaint from the applicants is that DSS officials maltreat and beat them every day,” he stated.

Meanwhile, the leader of Afenifere, a Pan Yoruba socio-political group, Chief Ayo Adebanjo, has kicked against the demand for 24 sureties by the court

Adebanjo, in an interview with our correspondent, described the bail conditions as “impossible” and a sign of an “oppressive regime” of the President, Major General Muhammadu Buhari (retd).

He said, “Some people who want to stand as sureties may not want the government to associate them with Igboho,” and appealed to Yoruba indigenes in Abuja to rise up to the occasion and ensure the detainees were freed from DSS custody.

Adebanjo stated, “What have they done? You locked them up and detained them, then you are asking for impossible bail? It is part of the oppression of this government. What is their charge to warrant such heavy bail? Murder? Stealing or what?

“They woke them up and bundled them to Abuja, killed some of them and those that are alive are given impossible bail. What further evidence of authoritarian regime do we need? It is unfair. Only God will save us from Buhari. It is an unfair position for bail but I appeal to Yoruba sons and daughters to bail them.”

The Afenifere leader also urged the Beninese Government not to cave in to the pressure of the Nigerian Government to extradite Igboho.

“There is nothing against him (Igboho) that warrants extradition. They (Beninese Government) should not dance to the dictatorship of the Federal Government because it is unfair to extradite him. Someone running away from his life should not be sent back to those who are going to kill him. He has not done anything criminal, all because he wants self-determination for his people, is that a criminal offence?” Adebanjo queried.

Also, the Aare Ona Kakanfo of Yorubaland, Gani Adams, in an interview with Saturday PUNCH, called on Yoruba people resident in Abuja to come to the aid of the detained persons.

He said, “Anybody that stands with you as a surety while in detention will be in your history for life. I appeal to the Yoruba community in Abuja to stand as sureties for those in detention. It is very important. I learnt that our group and some other groups are working towards meeting these stringent bail conditions.

“Those detained are freedom fighters and not criminals. Every Yoruba son and daughter in Abuja should please rise up and perfect the bail conditions of the court.”

Meanwhile, Yoruba Nation agitators have started fundraising to meet the bail by the Federal High Court granted to the 12 detained aides of Sunday Igboho.

The Communications Manager of Ilana Omo Oodua Worldwide, Maxwell Adeleye, made this known in a statement titled ‘Emergency Bail Contributions for 12 Yoruba Agitators in Abuja’.

The group led by Prof Banji Akintoye said, “Accounts were prepared to temporarily raise funds needed to move our people arrested at Chief Sunday Adeyemo Igboho’s house out of the bondage of the Nigerian Government before the close of business on Monday, 9th August, 2021.

“Our legal adviser has promised to supervise the utilisation of the funds for the purpose which it was created for. We hereby call on all Yoruba sons and daughters worldwide to support this drive