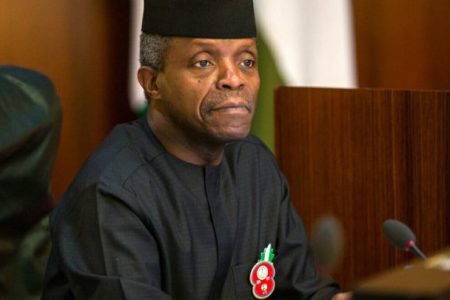 Vice President Yemi Osinbajo, SAN, has said that his primary assignment in government is to serve the people and honour God.

The VP said, “the scriptures say that we are the salt of the earth. Every time people ask me, they say, oh, why are you in government? And I say, why not?

“The calling of God upon our lives is that we must be in service. What is the point of light if it is kept under a bushel? What’s the point of salt if it does not go into the soup? If it is afraid of soup, what kind of salt is that.

“The scriptures say that we are the salt, so we should play the role of the salt. Now, salt is to make things better.

The VP then extended the issue to the church as an organization saying “it is the duty of the church never to lose hope. As a matter of fact, the only reason why hope is one of the central pillars of the church is because the history of mankind, the history of people, started from hopelessness. That is why we are there to give hope.”

Indeed prominent Nigerians from all walks of life have continued to praise Osinbajo for his service and dedication as Nigeria’s number two citizen. Some have even described him as the best and most hardworking vice president Nigeria has ever had.

For instance in March this year, the Emir of Gombe, Alhaji Abubakar Shehu Abubakar III, commended the VP for his leadership and being a dependable ally to President Muhammadu Buhari.

“This demonstrates your own role in the Buhari administration and a lot of confidence that Mr President reposed on you. We in the North are closely following your steady achievements; first as a successful law professor, a religious leader and now as the Vice President of Nigeria,” the Emir had said when Osinbajo paid him a courtesy visit earlier this year.