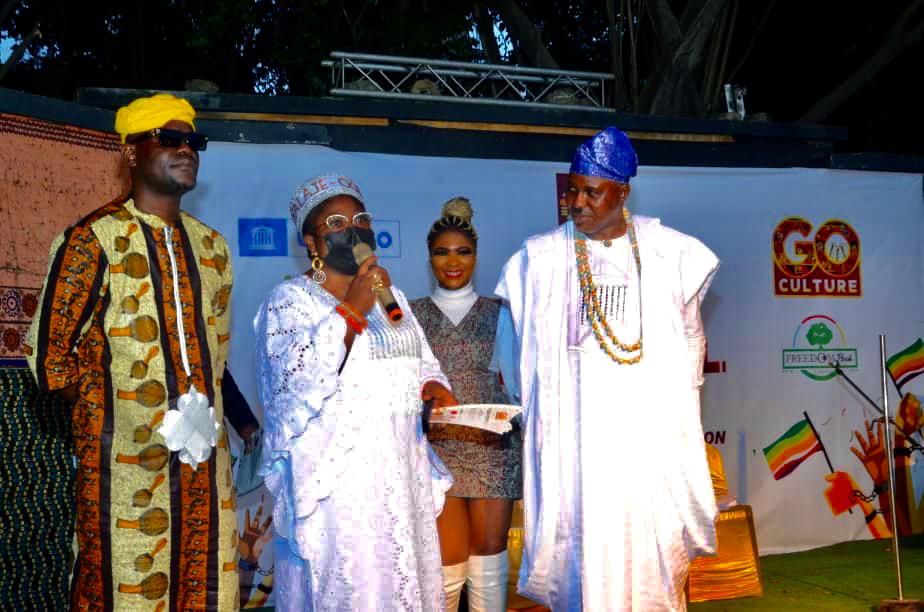 Go Culture, a prominent cultural promotion organisation has held an event in commemoration of the 2021 International Day for the Remembrance of Slavery and Its Abolition in Nigeria.

The group, a multicultural organisation which promotes indigenous African cultures also used the event to celebrate heroes who fought slavery to a standstill, highlighted cases of modern day slavery trends in the world and called attention to the urgent need to fight cases of abuses, domestic violence and other modern day manifestations of slavery.

Speaking during the annual event which held at the Freedom Park in Lagos Island on Monday, August 23, Go Culture convener, Idris Iwalewa Coker emphasised that slavery dealt a heavy blow to the African society and cultures and every manifestation of it should be discouraged in the 21st century to ensure consistent growth and development on the continent.

Coker stated that: “Go Culture in conjunction with sponsors and partners seeks to deploy the event to celebrate heroes who fought slavery to a standstill, highlight cases of modern day slavery in the world and call attention to the urgent need to fight cases of abuses, domestic violence and other modern day manifestations of slavery in our society.”

The event which had many culture enthusiasts, groups, dignitaries, activists and acrobatic dancers in attendance was held in conjunction with United Nations Educational, Scientific and Cultural Organisation UNESCO, Lagos State Ministry of Tourism, Arts and Culture, other supporters as well as sponsors who added great colour to the epoch-making event.

It was a night of celebration of cultural icons, poetry, exhibitions, tours, dance drama, music, arts and crafts, followed by thought provoking lectures from Bakare Mubarak, an African Youth Ambassador and Chairman of the occasion, Mr Babatunde Amakaye Olowu, Founder of Oral Works and Pep Talks on Eliminating Slavery Attitudes towards inspiring the society on the need to stand against slavery and sustain the gains of its abolition.

A statement from the Director-General of UNESCO on the global commemoration said: “The night of 22 to 23 August 1791, in Santo Domingo (today Haiti and the Dominican Republic) saw the beginning of the uprising that would play a crucial role in the abolition of the transatlantic slave trade. International Day for the Remembrance of the Slave Trade and its Abolition is commemorated every year on 23 August.

“The Day intends to inscribe the tragedy of the slave trade in the memory of all peoples. In accordance with the goals of the intercultural project “The Slave Route”, it should offer an opportunity for collective consideration of the historic causes, the methods and the consequences of this tragedy, and for an analysis of the interactions to which it has given rise between Africa, Europe, the Americas and the Caribbean.”

Go Culture also holds other flagship programs including an annual Festival which had the 6th edition during a week-long fiesta in April 2021.

The festival was done in collaboration with cultural agencies like; National Council for Art and Culture (NCAC), National Art Gallery (NGA) and National Institute For Cultural Orientations (NICO), Nigerian Tourism Development Corporation (NTDC) and Centre for Black and African Arts and Civilization (CBAAC)