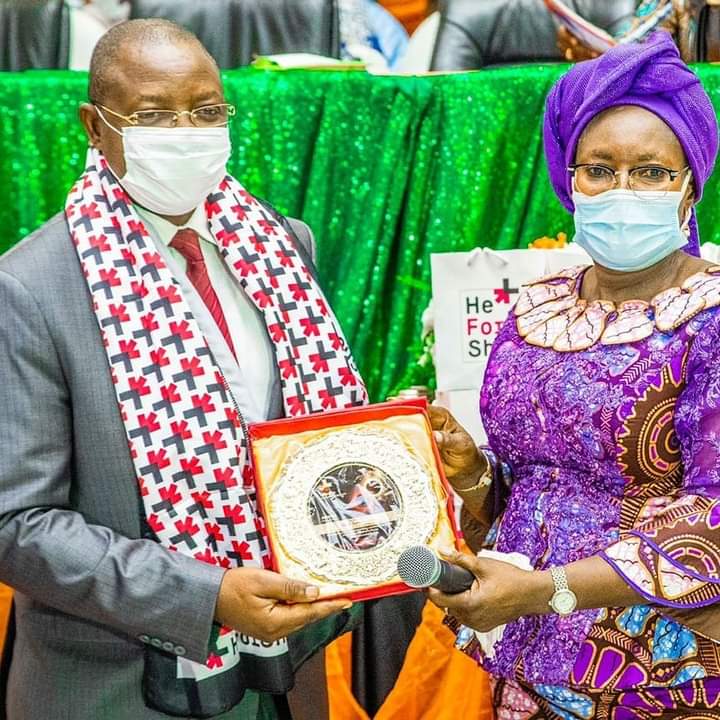 The Youth and Sports Development Minister, Sunday Dare has received a ‘HeForShe’ award for his contributions to the overall development of women even as he continues to make a case for conscious efforts in the promotion of the interests of the girl-child and the securing of socio-economic emancipation for the nation’s womenfolk through targeted policies and programmes.

Speaking at the occasion of the 21st Council meeting of the Women Affairs Ministry Thursday in Akwa-Ibom, Dare posited that with women making up 49.32% of Nigeria’s population, the need for gender equality and equal opportunities for girls and women cannot be overemphasised. He stated that women are still the most marginalised and vulnerable in the society despite their intellect, intuition, empathy and passion which gives the nation the much needed balance.

Reeling out statistics of women contribution to the economy, from women owned businesses that contribute 41% to the nation’s GDP to 71.68% of teachers being women, to women accounting for 12.6% of frontline workers who played a pivotal role in the battle against the COVID-19 pandemic, the Minister insisted that these figures are not enough and urged concerted action to encourage and create an enabling environment for women to do more.

At the Ministry of Youth and Sports Development over the past 2 years, Dare highlighted deliberate policies that has aided women inclusion. This he stated can be seen in 35% of current beneficiaries of the National Youth Investment Fund (NYIF) being female – receiving between N250,000 to N3m to upscale their businesses, a little under 40% of beneficiaries of Digital Skills training on “Google my business”, robotics, Artificial Intelligence(AI) amongst others are female, 20% Engineers enrolled in the Work Experience Programme (WEP), 20% of the 30,000 youth trained in leadership skills are also females.

The Minister while restating his commitment to scale up women inclusion in the programmes to at least 40%, advocated a National Mentoring model for younger girls in collaboration with the civil society, with its domestication at the State level. He also stated that his Ministry has ensured young people are educated on the catastrophic effect of rape and Gender Based Violence (GBV), reiterating women are given an equal opportunity in Sports which culminated in a sizeable number of medals won by women at recent international outings.

He charged his audience to build models of empowerment and development for women which should lead to increase in number of women owned joint venture businesses. “The agenda to elevate women and to place them above the glass ceiling is a good one and we all need to be part of that movement”, the Minister stated