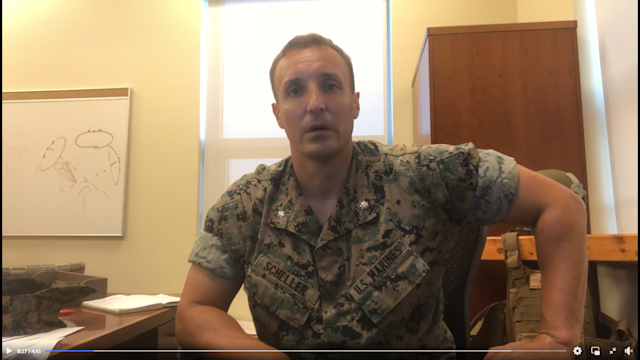 One day after he assailed U.S. military leaders over the deadly withdrawal of troops and American allies from Afghanistan in a Facebook video that ricocheted across the internet, a Marine Corps officer was relieved of command on Friday, the Marines and the officer said.

The officer, Lt. Col. Stuart Scheller, the battalion commander for the Advanced Infantry Training Battalion, said in the video that he posted on his personal Facebook page on Thursday that he could no longer stay silent over the chaotic exit of U.S. forces from the nation’s longest war.

He pointedly criticized Pentagon officials over the expectations that they created surrounding the ability of Afghan security forces to defend the country after U.S. troops left and for the decision to leave a strategic air base before the frantic evacuation.

“I have been fighting for 17 years,” Scheller said. “I am willing to throw it all away to say to my senior leaders, I demand accountability.”

The video, which the colonel also shared on his LinkedIn page, was viewed more than 200,000 times and received thousands of “likes.”

Scheller said that he started his current tour of duty with a unit that was providing perimeter security at the airport in Kabul and that he knew at least one of the 13 U.S. service members who were killed in a suicide bombing there on Thursday. He said that many other members of the military had similar misgivings but could not express them publicly.

“I’m not making this video because it’s potentially an emotional time,” Scheller said. “I’m making it because I have a growing discontent and contempt for my perceived ineptitude at the foreign policy level and I want to specifically ask some questions to some of my senior leaders.”

A Marine Corps spokesman confirmed in an email on Friday night that Scheller was relieved of command “due to a loss of trust and confidence in his ability to command.”

“There is a forum in which Marine leaders can address their disagreements with the chain of command, but it’s not social media,” said the spokesman, Maj. Jim Stenger.

In the nearly five-minute video, Scheller directed some of his criticism at Secretary of Defense Lloyd Austin, whom he said had failed to acknowledge the prospect of the Afghan national security force collapsing in the face of the Taliban’s advances when he testified before Congress in May. He also said that the Marine commandant, Gen. David H. Berger, and the other members of the Joint Chiefs of Staff needed to answer for what went wrong.

“The reason people are so upset on social media right now is not because the Marine on the battlefield let someone down,” Scheller said. “People are upset because their senior leaders let them down and none of them are raising their hands and accepting accountability or saying, ‘We messed this up.’”

Scheller, who lives in Jacksonville, North Carolina, and is about 40 years old, said Pentagon leaders should explain why the U.S. military left Bagram Air Base in July before the chaotic evacuation effort.

“Potentially all those people did die in vain if we don’t have senior leaders that own up and raise their hand and say, ‘We did not do this well in the end,’” Scheller said.