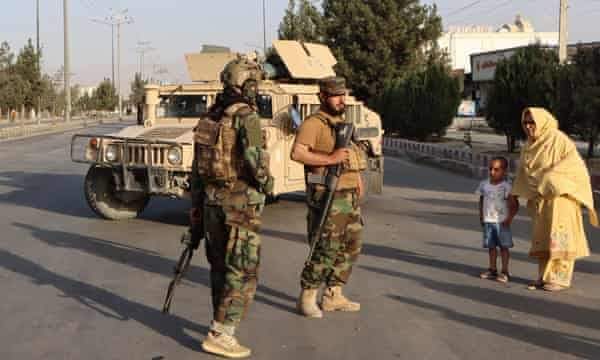 The Taliban has deployed extra forces and almost sealed off Kabul airport following the carnage that erupted after a suicide bomber detonated explosives into the crowd, killing 169 Afghan civilians and 13 US soldiers.

On Saturday, Hamid Karzai airport in Kabul remained under a high security alert, with the US telling any citizens still queuing at the gates to leave immediately.

The Taliban also began efforts to tightly secure the whole area around the airport. Extra Taliban forces, many armed with US military equipment, were deployed to set up new layers of checkpoints and blocked all routes to the gates, bringing some order to a previous place of terror and chaos.

For security purposes, following Thursday’s devastating suicide attack, Afghans allowed into the airport were stripped of their luggage and only allowed to carry a small plastic bag of possessions, as they left behind their whole lives in Kabul.

On Saturday, the UK ended its evacuation mission. More than 10,000 Afghan nations were evacuated by the British but the head of the UK armed forces, Gen Sir Nick Carter, acknowledged that they had “not been able to get everybody out” and said the decision to end evacuations was “heartbreaking”.

Britain’s ambassador to Afghanistan, Laurie Bristow, said in a video from Kabul airport that it was “time to close this phase of the operation now.”

“But we haven’t forgotten the people who still need to leave,” he said. “We’ll continue to do everything we can to help them.”

With other western nations also halting evacuations by Saturday, and just three more days till 31 August, the deadline for complete US withdrawal, the desperation of many still stuck in Kabul was palpable.

Among those who have been unable to reach the airport are dozens of local Afghan staff working for the UN, who have accused UN agencies of evacuating international staff immediately, and abandoning local staff until it was “too late”.

One Afghan woman who worked for a UN agency in Kabul for several years, and had previously worked for EU humanitarian agencies, said: “The UN evacuated the expats in the first and second week after the Taliban took over. They sent them to the airport safely in convoys but they literally did nothing for local staff. Some of the staff were crying in meetings, saying they didn’t feel safe at home. And all they [the UN] said was sorry, we will try to do our best. But they didn’t do anything and now we are trapped.”

She said that two days ago an agreement had been made that local UN staff who felt at risk could be “relocated”. However, only a few Afghan workers had been able to reach the airport to get on a flight due to the crowds, violence and imminent danger of militant attacks.

She and her family were among those who had failed to reach the airport five times, and had been present in the airport on Thursday when the suicide bomb was detonated, though far enough back not to be hit.

“My daughter is totally traumatised because around us were people who had died, people were screaming with blood all over them, it was the worst day so far,” she said.

She feared that with the UK evacuation ending on Saturday, alongside most other western countries, and only a few days before the complete withdrawal of US troops, her window of escape was closing fast.

“The UN are trying to do something for us now, but it’s too late, they could have done it months earlier,” she said. “I really am angry because I’ve been working with the UN for many years and I wasn’t expecting [them], at a hard time like this, to just abandon us. It’s just the local staff who have to stay and suffer.”

Mohammad Naciri, regional director for UN Women Asia, said that evacuation efforts for their teams, and Afghan female human rights defenders, were still ongoing, and they were in discussions with member states to help “facilitate those who feel they would be safer out of Kabul”.

“But any future discussions with the Taliban will include the need to ensure the safety and security of our staff,” he said.