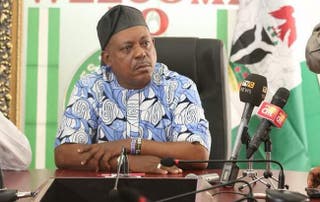 Despite the alleged suspension from the ward party exco, the embattled National Chairman of Peoples Democratic Party (PDP), Uche Secondus, has said the ward exco has no such power to suspend you but such power is only in the hands of National Executive Council , NEC, of the party.

Mr Secondus, currently battling court injunctions barring him from office, was declared suspended on Wednesday by Ward 5 of Andoni Local Government Area of the state, which is his primary base, after an extraordinary meeting of the ward executives.

“The ward executive of the Peoples Democratic Party in Ward 5, Ikuru town; the leaders on the 31st of August, 2021, discussed issues that affect the party.

“Suspension of Prince Uche Secondus was done by the ward executive after a duly constituted ward meeting called by the Secretary on the instructions of the chairman, according to the Constitution of our great party.

Out of the 17 members of the executive, 11 reportedly endorsed the decision to suspend the embattled national chairman.

Reacting, Mr Secondus said through his media office that the “suspension” was a mere wish of the ward executives as only the National Executive Committee (NEC) could discipline the national chairman.

A statement by his media adviser, Ike Abonyi, said, “The media office of Prince Uche Secondus ordinarily should not be responding to every ‘noise’ in the media being engineered by those who set out to distract and destroy the Peoples Democratic Party, PDP, but it’s our responsibility to guide those who are easily persuaded by news in the media hence this response.

“Such action is a mere wish as Article 59(3) of the Peoples Democratic Party, PDP, (the) constitution states clearly that only the National Executive Committee, NEC of the party can discipline the National Chairman or any other National officer of the party.

“Members of the public and the media should therefore be wary of agents out to distract PDP from the focus of retrieving our beloved country from the irreparable damage already done to it by the ruling All Progressives Congress, APC.

Before his appointment as the PDP national chairman, Mr Secondus had served as Rivers State chairman of the party.