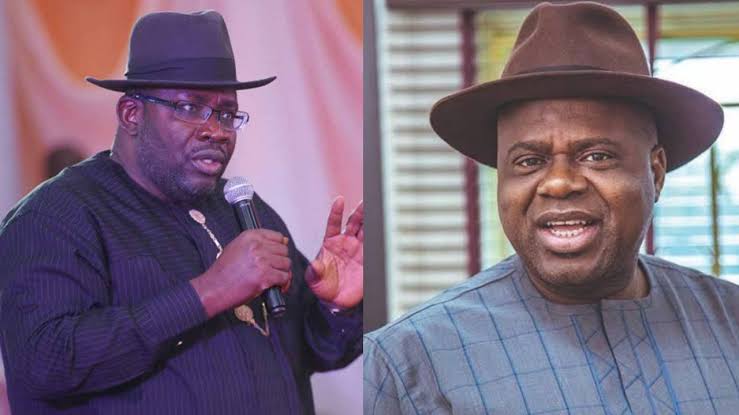 The former Governor of Bayelsa State said he deliberately distances himself from Diri’s administration to allow him to operate.

There have been claims that the lawmaker stopped relating with his successor because of some of his development and economic policies which he isn’t comfortable with.

Dickson in his statement said he is constantly in touch with Diri, especially on issues affecting the development of the state.

He stated this at the grand reception in honour of leaders from Bayelsa West Senatorial District by the state chapter of the PDP.

Dickson recalls how the PDP won the last governorship election in the state, he expresses confidence that the party would continue to win future elections in the state.

He called on members of his party to be united as the party can only be strong when it is united.

Dickson commended the Bayelsa State Governor for the development of the state.

Also speaking, Diri appreciated the people of Bayelsa West for the honour done him and other leaders of the senatorial district and pledged to continue to serve his people diligently.

He noted that PDP would always be victorious in the state.

Diri said, “I join all of our leaders and in particular our leader, Senator Seriake Dickson, and all of us in Bayelsa West that you thought it wise to honour to thank you. I thank you from the bottom of my heart. What you have done is an honour and honour would also find you.

“There is nothing we can do to pay you back. Only God can repay you.

“By Gods grace, PDP is still the party to beat in Bayelsa State. Today is not for campaigns but it is a day for unity.

“Do not divide the house because you are yet to get an appointment. This is one family and we would increase in number. We have been doing that and receiving defectors and returnees in their numbers