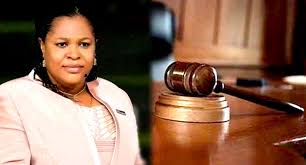 The crisis at the Synagogue Church Of All Nations (SCOAN) has taken a new turn as the Economic and Financial Crime Commission has been reportedly involved.

According to Insiders, EFCC were involved in the issue for the main purpose of quizzing late Prophet TB Joshua’s Prophets who were trained by the man of God to take over from him.

The reports also accused late Prophet TB Joshua’s wife, Mrs Evelyn Joshua of being the brain behind the EFCC involvement.

It was also exclusively gathered that the prophets including foreign evangelists have been invited by the EFCC and are mandates to appear before the commission from tomorrow Monday till Wednesday.

It would be recalled that three days ago, a court order made Mrs Evelyn Joshua a trustee of SCOAN.

Meanwhile, reliable sources revealed that before Prophet T.B Joshua’s passing away to glory, he removed Mrs Evelyn Joshua from the member of the church’s board of trustees because she disrespected him when she allegedly gave out their first daughter in marriage without the consent and approval of the late Prophet which was why he was allegedly absent from the nuptials.

It is worthy of note that since Prophet TB Joshua died, there have been leadership tussle between his widow and some of the disciples whom the late Prophet trained to take over from him.

However, Prophet TB Joshua in an interview he granted on THIS DAY NEWSPAPER before dying had cleared all insinuations that the SCOAN ministry can be inherited by his wife or family members.

He explained that his Ministry is an apostolic ministry and totally spiritual, noting that only God can anoint anyone to succeed him.

Though he expressed his will to make his wife like he is but made it known that it is not possible because God has not anointed her.

“I am very happy about this question. I have a wife and I have children, and even my first daughter is doing her PhD and my second daughter is doing her master’s degree in Oxford. In all, I have three daughters. The last one is still in secondary school. I would have loved my wife to be like me but I cannot make her what I am, it is God.

“I can’t anoint her; God is the one that anoints people. So she can’t sit here at the same time, this is not a biological issue, it is an inheritance from the saints, it is being a partaker from the saints. So, therefore, I should not use anything in my biological life to stop my spiritual life.

“As for my divine nature, I am a partaker of the inheritance of the saints, So, therefore, it is so difficult for me, this is an apostolic ministry, it is not a ministry you read the Bible, go to theology school, get your certificate and you start preaching! No. It is purely divine. So, it is so difficult for me to display my wife, she has to be ready for God. As much as you are ready for God, God will display her.”