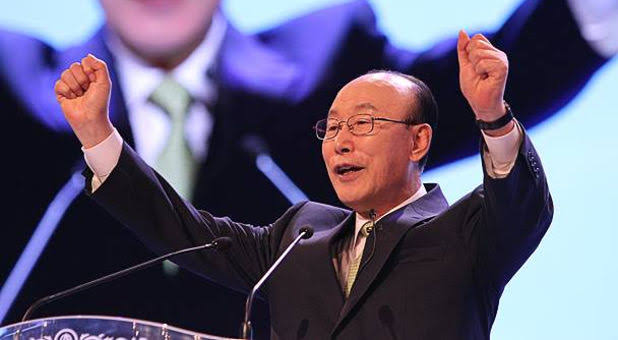 The popular South Korean minister was 85.

Cho, an emeritus pastor at Seoul’s Yoido Full Gospel Church, died at a Seoul hospital where he had been treated since he collapsed due to a cerebral hemorrhage in July 2020, the church said.

“He conveyed the gospel of hope to the Korean people who fell into despair after the Korean War,” the church said in a statement. “He was instrumental in growing the Korean church, particularly developing Yoido Full Gospel Church as the world’s largest church.”

Better known as David Yonggi Cho or Paul Yonggi Cho abroad, the late pastor started his church in Seoul with five worshippers in 1958, when South Korea was still struggling to rebuild itself from the ashes of the 1950-53 Korean War. Under his leadership, the church achieved explosive growth and become a symbol of the rapid growth of Christianity in what was then a deeply Confucian country.

In 1993, the church had more than 700,000 members, making it the world’s biggest church congregation according to Guinness World Records, the church said. Church officials said its membership has since declined to about 600,000 and that they cannot confirm whether their church remains the world’s largest.

It’s still the largest Protestant church in South Korea. Church officials said it has 400 pastors and evangelists in South Korea and 500 missionaries abroad.

In 2008, Cho stepped down as the church’s top pastor and a non-family member succeeded him in what the church called “an unprecedented, democratic” power transition. In South Korea, many church founders hand over their leadership positions to their children.

Lee Hunjoo, secretary-general of the Christian Alliance For Church Reform, a Seoul-based NGO, said the fast rise of Cho’s church led other churches in South Korea to push excessively to expand their own congregations.

“It’s true that the Rev. Cho did meaningful work for Korean churches,” Lee said. “But in some sense, megachurches in South Korea began with Cho’s Yoido Full Gospel Church.”

According to a 2015 government census, Protestantism was the biggest religion in South Korea, followed by Buddhism and Catholicism. There were about 9.7 million Protestants at the time, accounting for nearly 20% of the country’s then 49 million people.

Cho is survived by three sons. His funeral is set for Saturday, and the church will receive mourners from Wednesday, according to the church.

In a statement on Tuesday, Pastor Enoch Adeboye of the Redeemed Christian Church of God, RCCG recounted his encounter with Cho during his lifetime.

According to him: “Several years ago, I visited South Korea because I heard of a man who had the largest Church in the world.

Adeboye recalled how Yonggi Cho told those who attended “who came one Sunday to please not come back next Sunday so that those who couldn’t come last Sunday can come next Sunday.”

“Some years ago, I returned to South Korea, I had a meeting with the same man. The first time I was there, people like me could not come near the office but this time around, I went to his office at his invitation, when we met he said “I have heard of you, will you please pray for me?

In his tribute, Joshua Iginla, a Nigerian televangelist, said the late Cho had fought a good fight and will forever be remembered.

“Death is nothing else but going home to God, the bond of love will be unbroken for all eternity for your warm embrace as a true father who gave me wings to fly limitlessly,” Iginla wrote.

“A South Korean yet spiritually available to father me regardless of tribe, distance and country. Your wisdom, teaching and instructions will abide with me forever.

“One may think with the millions of congregation under your care you may not be available for mentorship but that was never the case with you Dear Father, you could identify the few chosen among the thousands that were called and you mentored through every available means. Oh father my heart bleeds but I know someday we will meet and not part again at the feet of our Heavenly Father.”