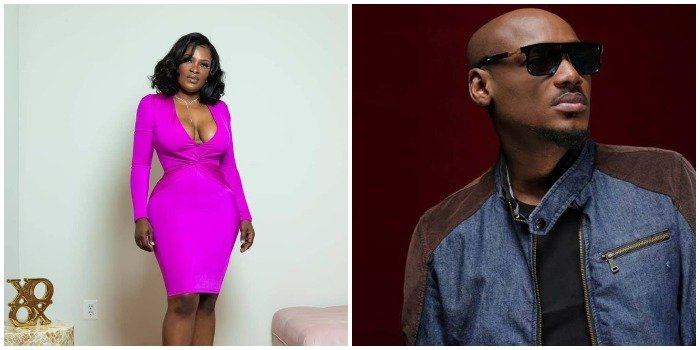 Three years ago, a story broke about how Tuface and 2 of his baby Mama’s reconciled. Trending all over the social media then was the reconciliation video between music legend, Tuface’s wife, Annie and his baby mama, Pero Adeniyi which happened at Crescendo night club in GRA, Ikeja Lagos during an event. The video went viral immediately it was released into the social media space and was reported in almost all mediums.

Tuface’s private life is one that makes news every time because he is one of the hot artists in town and his private life has been a thing of concern for the public because of the antecedents of how he got married and the many women that had children for him almost simultaneously in a row. Pero can be termed a Lagos big babe turned US big babe because she is well-rooted in the showbiz circle in Nigeria.

She is one of the baby mama’s of Tuface Idibia and they have been together for many years. In fact, she is the first and she plays an important role in his journey so far since they knew each other 16 years ago. She is also popular like all the other baby mama, she might not be living here in Nigeria but she has her ears to the ground when it comes to entertainment. She comes from a rich pedigree and was born into a family that loves entertainment.

Her father is the boss of Poatson Musical Jamboree famous for music promotion, he also has a printing industry viz-a-vis a transport company. Pero was once married to Lagos big boy, Kunle Borokini and they both have a kid together. Pero has been in Tuface’s life for such a long time after meeting in the year 2005 till the year 2012 when Pero had her last born for him. Those 7 years relationship produced 3 children namely Ehi Rose Idibia who is the singer’s first daughter, born in 2006, the second child, Justin was born in 2008 and the last child, Innocent Ejeh, named after 2Face Idibia was born on April 8th in 2012.

Back in the years, Pero was reported to have a stronghold on Tuface being the first lady in his life as at that time and also due to Pero’s exposure. Pero’s love story with Tuface lasted for 7 years and started in 2005 until he proposed to his longtime girlfriend turned baby mama and later wife, Annie Macaulay.

Ever since then, the relationship between Pero and Annie had turned sour before they finally made up in 2018. Pero was prominent in Tuface’s life when she was a regular visitor at the Cedar hospital where Tuface was admitted when he was brutally attacked by armed robbers in his FESTAC flat, leaving him and his siblings injured and traumatized. She was reported to have been visiting the hospital with numerous gifts for Tuface which made their relationship strong.

This relationship lasted for 7 years during which Tuface was also having affairs with his other baby mamas before he proposed and got married to Annie in 2014. Tuface has been the happiest being as he said during the reconciliatory moment between his wife, Annie and baby mama, Pero Adeniyi.

There had been a bitter war between the duo but that still did not stop Tuface from taking care of all his kids which a lot of people gave him thumbs up for. Many times, he has visited his children, both the ones in Lagos and Pero’s Children in US time without number and has performed his fatherly role maximally.

It was gathered that this had troubled the Pop legend for years and this reconciliation has taken out a heavy burden from his heart as he has been able to broker peace between the two women. Pero has been living her life quietly in Clarksville, Maryland, the US and she is currently championing a kidney foundation in Nigeria called A life Alive Kidney Foundation, ALAK after she donated one of her kidneys to her mum in 2015 and they are both living fine. The pretty young woman who attended the University of Lagos is in her 40s.