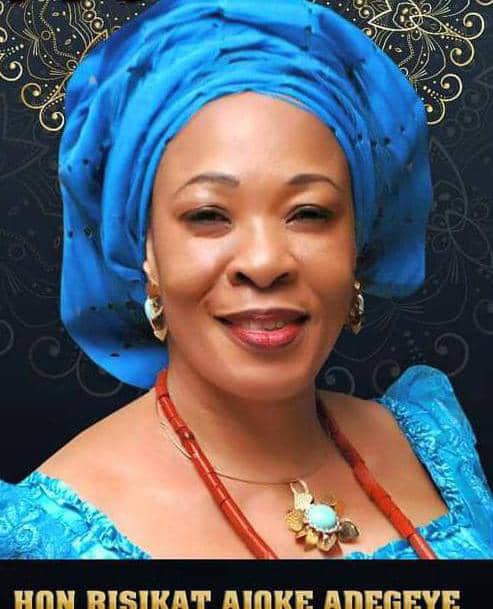 Investigations had revealed the real cause of the  demise of Hon.Risikat  Ajoke Adegeye, an All Progressives  Congress (APC) chieftain, wife of  Juju Maestro King Sunny Ade in Amuwo-Odofin area of Lagos State, who died on Tuesday a day before her husband’s 75th birthday anniversary.

Alhaja Aminat a widow, who is a member of the Geye Solidarity forum, one of the numerous grassroot groups  of the late lawmaker in Amuwo-Odofin,  made the disclosure to our reporter that the late Hon. Adegeye took ill following the APC leadership’s resolve to subvert the people’s will in the May 29th council polls, which duly elected Hon. Dipo Olorunrinu as Executive Chairman Amuwo-Odofin Local Government.

As a leader who feels the pulse of her people and also identified with their choice, the former lawmaker was said to have swung into action, having cited the anomaly by calling all that could help remedy the situation and restore the people’s mandate, so as to ensure peace in the area but all her pleas fell on the deaf ears of the powers that be.

This  development for which she tried to get a redress but proved abortive, weigh in on her health to the extent that she was hospitalized and taken from one hospital to another till she later gave up the ghost on Tuesday.

Residents of Amuwo-Odofin who are party faithful in the area could not hide their detest for the party leadership, whom they claimed killed their jewel for the love of filthy lucre.

According to them Adegeye is a loyal stakeholder in the party, whose hope got dashed by those leaders she felt will do what is justified in the whole matter.

“Check this  picture she gracefully took with the said  Hon. Dipo Olorunrinu when he picked up the LASIEC form issued after the poll we there in a joyous mood because that authenticated his emergence as duly elected and well publicized winner by the party in the national dailies  on June 4 before it was  substituted in a clandestine manner, it pointed to a fact that her dove-like heart was rent into pieces.” Alhaja Aminat said.

Fingers are pointed at the incumbent Chairman of the council, Mr. Valentine Buraimoh, who was said have the backings of the leadership of APC in Amuwo Odofin to perpetrate the daylight robbery of the people’s mandate not minding  much plea from the deceased to ensure justice.

In an attempt to validate the claims from other sources, our roving reporter placed a call to get Hon. Dipo Olorunrinu’s view on the matter, he declined comments on the grounds that the late lawmaker’s demise left him speechless, as he is yet to get over the rude shock, he later referred the journalist to the deceased’s family or the leadership of the party, whom he said are in the best position to affirm or disprove all said.